25 Activists Arrested in Two days of Nonviolent Blockades at Gates to Creech AFB;

As the sun rose over the mountains activists  from over 20 states participated with CODEPINK in a Mass Mobilization in the desert outside Las Vegas to shut down the gates to Creech Air Force Base, home of the Reaper and Predator drones program. For over an hour on both Thursday, March 31 and Friday, April 1, activists protested, performed and called for peace. This was no April Fools’ joke but a serious mobilization of people who stepped over the line to confront the airmen who control killer drones. The two days of actions were part of a week-long protest at the base, March 27 – April 1st, culminating in a total of 25 arrests during the 2nd Annual National Mass Mobilization against Drone Warfare known as SHUT DOWN CREECH!

On Sunday the 27th activists began to converged at “Camp Justice,” the peace camp directly across from Creech AFB, for daily rush hour vigils, nonviolence training workshops, and strategizing meetings to prepare for these nonviolent blockades to impede drone killing.

There were over 16 campers for the first evening at Camp Justice Sunday night. The winds were blowing fiercely throughout the night, as CODEPINK welcomed all campers onto the sacred grounds of the Temple of Goddess Spirituality, where the walls of the modest guest house/mobile home provided a haven and protected us from nature’s elements.  Everyone was well nourished with a simple meal and friendship…and space was found in the guest house for even the campers, as many of their tents had been blown into uninhabitable shapes!  Gigantic thanks to Don Kimball who held the peace fort at Camp Justice thru the night, keeping all secure.   Dennis, Ralph and Ray were also super generous, taking on the role of peace camp security crew for the entire week! Col. Ann Wright joined us in the wee hours of the night, and woke up at 5am with the rest of us for Monday’s vigil.

We had a most successful 1st vigil on Mon. Mar. 28, with a good crowd of about 20  “Creechers” joining us for the very 1st morning vigil.  With continuing very cold gales, some of us dared to hold a few of the medium sized banners, and smaller signs and visuals.  As body temperatures continued to drop, an impromptu silent “funeral procession” was created with most of the 7 coffins/countries represented, with activist Susan Witka carrying the final message, following the coffins:  “Who’s Next?”   The procession gave a somber tone about the overall human costs of global wars, while allowing some of the activists to warm up while being in continuous motion.
Monday afternoon spring desert winds picked up ferociously, at times with gusts at over 60mph  (evening weather reports said 70mph winds), and temperatures dropped drastically, testing our inner strength to continue our protest of drone warfare at the killer drone base known as Creech AFB, in southern Nevada.  Large banners were substituted for smaller visuals and signs, including the 7 small coffins with names of 7 of the predominantly muslim nations we have been bombing over the last 15 years.  We also showed a banner for GI RIGHTS HOTLINE with its phone number. Surprisingly, we stayed our ground throughout most of the 2 hour planned vigil, in spite of strong winds and dropping body temperatures.

More folks arrived though out the day and night Monday, as we all got ready for 3 days of scheduled activities, including civil resistance/affinity group preparedness, the Drone Whistleblowers Symposium on Wed. night, the Concert with David Rovics on Thurs. night, and the big climax on Friday to peacefully and nonviolently put a halt to the killer drone operations at Creech, for as long as possible.
The EEK Team, “Environmentally Evolved Kids”, our beautiful children’s affinity group from Northern California, worked hard  getting their “Angel attire” ready for the big day on Friday to SHUT DOWN CREECH. The peace keepers bright yellow headbands were completed, thanks to the help of Arla, Maggie, Casey and Toby, and were ready for the “big day.
On Thursday, the day before Friday’s gate blockades, 8 activists, including 7 veterans were arrested in a earlier blockade at the heavily used eastern gate, blocking morning traffic as well.

Anti-drone protesters executed waves of multiple non-violent peaceful actions at Creech Air Force Base throughout the morning Friday, April 1, with the intent of interrupting the drone killing activities that take place there.  Creech AFB, in southern Nevada, is the primary Command Center for the CIA’s and President Obama’s Drone Assassination program.  At the most heavily used eastern gate, a total of 13 people were arrested in 4 separate actions.   After military personnel re-opened the main base gate in the later morning after the 1st action there, three more waves of blockades occurred.  The 3rd and 4th waves breeched a barricade near the gate and continued to block the road, ultimately stalling gate operations for nearly an hour totally, counting all actions at that gate.  Another 4 were arrested at a 2nd gate.

The first incident at the eastern gate occurred at approximately 7:00 AM when a group of six children and eight adults all dressed as angels, performed a mock drone attack on a funeral.  The activists were demonstrating the gruesome U.S. practice of firing drone missiles into funerals for victims previously killed by U.S. drone attacks, with hopes that militants might also be killed.  A ballerina led the procession, laying red roses on the entry road of the main gate, followed by the other children carrying a casket.  The funeral procession was interrupted by a simulated drone attack that killed and injured many of the mourners.  Ultimately seven adults were arrested after they refused to  leave the roadway after a 5 minute warning. 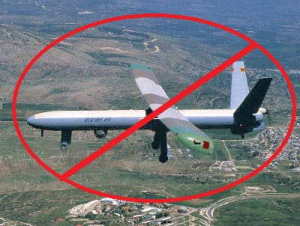 At approximately the same time, actions took place at the other two base gates, leading to more arrests. The blockade at the 2nd gate focused on the criminal aspects of the U.S. drone assassination program.  Activists stretched yellow crime scene tape around the base sign and across the entrance to the gate, preventing vehicles from entering.  One protester laid across the roadway to portray a drone victim.   And at the seldom used most western gate a small group held a silent meditation vigil for peace.  Activists successfully delayed Air Force personnel (and presumably some drone pilots and technicians), from entering the base throughout the morning.

Counter protesters from town, the same 3 to 4 that have been coming regularly for years, were holding their space, in at times a very confrontation-seeking fashion, but we were able to do our best to stay within our nonviolence guidelines, and keep the confrontations from escalating, though it has been trying for some.  The police had lined up barricades on most of both sides of the entrance into the base, anticipates the major civil resistance planned on Friday, but also showing favoritism, at times, to the counter-protesters.  A beautiful sight one morning was seeing Phil, a local counter-protester deliver a cart load of firewood for our fire circle.
Many Creech personnel arrived to the base before the normal 6- am rush hour on Friday, presumably to avoid the protest.  Activists who participated in this collective effort consider even that a success because the protest is having a direct impact on daily drone operations.  These sustained actions are forcing the military to change their daily routines, and potentially stimulating more discussion about the drone policies in question and the growing national opposition to drone killing. These activities were done to highlight the Obama administration’s drone killing program that leads to many civilian deaths and violates international law. We deeply hope that our voices will one day soon be heard, and the expanding use of these deadly and destabilizing weapons against the most vulnerable people in the world will cease.
Friday’s arrestees: Leslie Angeline; Fred Bialy; Toby Blomé; Cynthia Papermaster; Dennis DuVall; Arla Ertz; Rene Esplanade; Ron Faust; John Ford; MaryKate Glenn; Chris Nelson; Mahai’a Oliveira; Shirley Osgood; Flora Rogers; Tyler Schaeffer; Brian Terrell; Susan Witka.
TOGETHER WE CAN: Ground the Drones & Stop Global Warfare!
Please consider joining us next time.
Toby Blome CODEPINK SF