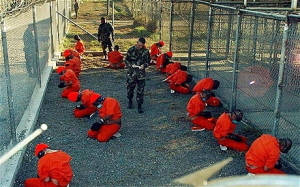 Starving for Justice: Berkeley Women on Day 32 and of Hunger Strike to Demand that President Obama Stop the Force Feeding and Release Innocent Guantanamo Prisoners

Berkeley, CA – Two Berkeley women are on open-ended fasts in solidarity with hunger striking Guantanamo detainees. They are calling on the President to immediately free the 86 men who are cleared for release and to stop the force feeding of 40 men. Cynthia Papermaster and Cynthia Johnson, both of Berkeley, are fasting to dramatize the demand that the President begin transferring men from the prison facility. They join American hunger strikers Elliot Adams, and Tarak Kauff, US military veterans who have been fasting for 52 days and 42 days respectively.

“Can President Obama take action? Yes! While Congress has imposed unprecedented restrictions on detainee transfers, President Obama still has the power to transfer men right now. He should use the certification/waiver process created by Congress to transfer detainees,” said Cynthia Papermaster, who is on Day 32 of her open-ended fast.

“As far back as 2008, President Obama pledged that he would close Guantanamo Bay Prison,” continued Papermaster. “why not release the 86 cleared prisoners? Over 100 prisoners are on a hunger strike at Gitmo. More than 40 are being force fed, a practice that the American Medical Association, the United Nations, and New England Journal of Medicine, and Senator Diane Feinstein call aggravated assault and torture. We are making enemies and suffering from the shame of these policies as we continue to violate international law and human rights. These men are human beings, many are innocent. Obama needs to free them immediately, stop the force feeding, and charge and try the remaining men.”

Retired Colonel Ann Wright who supports the hunger strikers said “The situation is critical. It’s time for our President to stop blaming Congress and immediately transfer the Guantanamo prisoners who have already been cleared for release, and provide a fair trial to the rest of the men still being held. The hypocrisy of this blatant violation of American values is hurting our reputation throughout the world.”

Cynthia Johnson said “To quote George Orwell, ‘In a time of universal deceit, telling the truth is a revolutionary act.’ I want to tell the truth about the inhumane, unconstitutional, immoral treatment of Guantanamo detainees. I’m fasting to say “let these innocent men go now. Let them return to their families, to their lives. Don’t hold them one more day.”