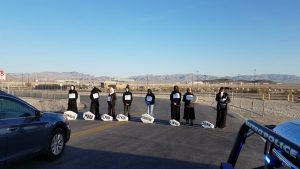 Photo by Michael Kerr
CODEPINK had a small crew last week, but we accomplished a lot.  Huge banners and signs opposing the barbarism of drone assassination colored the highway all week during am and pm commute traffic into and out of the base.  Themes included:  “Ending Militarism at Home & ABROAD,”  “RESIST, DISARM, REFUSE,” “ WAR IS NOT GREEN,” and many others.
On Tuesday morning, activists created a very mournful funeral procession along the highway in black dress and white masks, while carrying coffins labeled with the 9 countries the U.S. is currently “droning.” Each person also wore a sign listing the name and age of a young child that had been killed by U.S. drone missiles in YEMEN.  The procession eventually continued onto the roadway “to stop business as usual” at Drone Creech Killer Drone Base.  Cars backed up for a long distance down the highway, and, curiously, were NOT diverted to another gate.  Most of the marchers were willing to stand in the roadway until their 2 minute warning ended, and 1/3 of our crew stepped forward to risk arrest.  Maggie Huntington, Eleanor Levine, Susan Witka, and Toby Blome were take promptly to Las Vegas Jail for blocking the entrance to the base and refusing to disperse.  All were later cited and released in the late afternoon.
Many of us noticed much fewer supportive waves and peace signs exhibited by military personnel compared to past vigils.  Later in the week it was revealed to us by a confidential source that the commander of the base has given very strict orders to not look at, wave, give peace signs or interact in any way to protesters.  In spite of that, there were a handful each vigil that were willing to question authority and express their free will.
At the end of the week, a large banner was displayed to spread the great news that over 3,000 Google employees “said” NO TO DRONES, by signing a joint letter to their CEO to end the contract Google has with the U.S. Military to design technology that will be used in the drone program.
PHOTOS HERE.
MEDIA ALERT & MEDIA COVERAGE below.
MARK YOU CALENDARS:
September 30 to October 6:  4TH ANNUAL SHUT DOWN CREECH
Of note:  While we were protesting at Creech this week we witnessed a drastic increase in Reapers taking off and landing, practically every 5 minutes.  This is a dramatic change.  These are new pilots in training.  This is a very worrisome sign.  Please won’t you join us whenever you can to stop this barbaric madness?
Shocking News:
Of the 61,723 US Air Strikes in the Middle East in 2016, 81% of the time the targets “had been under a Reaper’s crosshairs” at some point during the “discovery to destruction” cycle.
(Details in Ann Wright’s post below).   WE NEED HUNDREDS PROTESTING WITH US AT CREECH THIS FALL!!!
Hope to see you there,
Eleanor, Maggie & Toby
*****************************

Ann Wright April 5th: Want to know how many air strikes “kill chain” the US has done in the Middle East in 2016–61,732!  No wonder attacks against US forces and US interests around the world continue!

“Flying a third of the Air Force’s sorties across Central Command’s area of operations, Predators and Reapers accounted for about 7 percent of strikes in 2015 and 9 percent of strikes in 2016 — but even more frequently, they found enemies and “passed the ball” to teammates. According to Col. Cluff of the 432nd Wing, Predators and Reapers were involved in “pretty much every engagement.” In the cycle from discovery to destruction, they were part of the kill-chain for 50,301 out of 61,723 strikes. In other words, just over 81 percent of the time the U.S. Air Force attacked, its enemies had been under a Reaper’s crosshairs.”

CREECH AFB, LV – Four women, all in their 60’s and 70’s, were arrested this morning (Monday, April 3) at the main gates here protesting the US illegal immoral assassin drone  program – The US is currently bombing seven to nine countries and the Trump administration is in the process of ramping up this “assassination program on steroids.”Those arrested – they are still in custody at a local jail – for their peaceful opposition to terrorist drone warfare, which makes more terrorists and enemies with its indiscriminate killing, are: Toby Blome of El Cerrito, CA, Eleanor Levine of Oakland, CA. , Susan Witka of San Francisco, CA and Maggie Huntington of Flagstaff, AZ.CODEPINK, Veterans for Peace, and others said they are protesting increasing U.S. drone killings of civilians, including women and children, in  Niger, and Mali, along with continued drone attacks in Afghanistan (“the most droned place in the world”), Yemen, Syria, Iraq, Somalia, Libya and Pakistan.According to protestors, activists may risk arrest to nonviolently interrupt “business as usual” of illegal and immoral targeted killing by remotely controlled drones at Creech. “We are ‘marching for their lives’….our Muslim brothers and sisters who have a right to live their lives free from the ‘drone fire’ from the skies.”

Tuesday, demonstrators will tie in the massacres at home & abroad (ex:  LV Mandalay casino mass killings, Florida/Parkland school mass killing reflects the bigger picture of our govt’s regular practice of mass killings/massacres by drones and conventional missiles (wedding parties, funerals, mosques, schools, homes, etc) in endless “warfare” against those unable to defend themselves, much like the students at the high schools cannot defend themselves against mass shooters.)

According to organizers: “With this week’s 50th anniversary of the My Lai Massacre, where the U.S. military slaughtered over 500 villagers in Vietnam, it is a time to reflect.  The ongoing U.S. drone attacks represent modern day mini-My Lai massacres…relentless and barbaric, “hunting” people who have no ability to defend themselves.

“The U.S. Killer Drone Program is as covert as ever, but continues to brutally kill people in the poorest communities of the world, as they go about their daily lives, driving on a road, praying in a mosque, eating with their family, studying in school, attending a wedding party or funeral. ”