Sept: SDG #17 Partnerships For the Goals 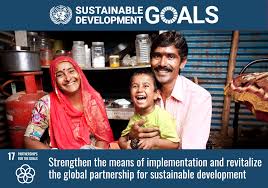 The Local Peace Economy joins the United Nations in its call for a Decade of Action to transform the world by 2030. The 2030  Agenda for Sustainable Development 17 goals, adopted by all United Nations Member States in 2015, provides a shared blueprint for peace and prosperity for people and the planet, now and into the future. This  month Sustainable Development Goal the Local Peace Economy is working on is #17 Partnerships For realizing the Sustainable Development Goals.  A successful implementation  of the 17 SDGs  requires inclusive partnerships — at the global, regional, national and local levels — built upon principles and values, and upon a shared vision and shared goals placing people and the planet at the center.
Since civilization began 5000 years ago, a few men who ruled  mainly as tribal kings, have been at war with each other,  nature and subjugated women. Civilized history has been bloody, where once men hacked each other  and innocent women and children with swords at the local city level, they can now on a global level destroy all of civilization with a push of a button. Their assault on nature has been equally as brutal. Practices on the local level, such as slash and burn, strip mining, clear cutting, over grazing has  lead to deforestation, desertification of millions of acres of once productive land and on a global level  the entire atmosphere is polluted along with all the oceans.  These actions has pushed the earth and civilization to a tipping point. Soon the speed of climate change will outrun civilization’s ability to manage it affects on all life on earth.
These changing patterns have already disrupted food production  resulting in suffering and conflict for people forced to migrate to find food because their local farm community land has become unproductive and countries that could help  make their land sustainable don’t and block their entrance at the borders leaving them in limbo, hungry and without hope for a future where no one is left behind.
Civilization around the earth has a choice to make about the future we want. Do we want a future of a post apocalypse  climate change disaster movie where civilization, because it failed to cooperative to prevent the disaster, has collapsed and roving humans bands fight and kill each other for food. That is the path we are on. Or do we want a future where citizens around the earth chose to cooperate with each other and make sure everyone has enough to eat.
After 5000 years of male lead tribal political warfare and exploitive assault on nature which has brought civilization to the brink of destruction. It is time to change the way civilization is managed.  Civilization can no longer be managed in a male tribal completive way  that benefits only a few and leads to violence, it has to be managed in a democratic non-violent cooperative way that benefits everyone. Moving towards a civilization that is peaceful and sustainable will require world leaders, civil society and leading business to engage in this transition collaboratively. It will require sustained effort on the part of policy makers and their constituents to rethink and redefine traditional measures of wealth, prosperity and well-being.
Time is running out for civilization, climate change is already effecting everyone of us and it going to take all of us working together to help each other to have a secure food supply and a bright future.   Goal 17 is about strengthening the means of implementation and revitalization of the Global Partnership for Sustainable Development.

The world can tackle the climate and pollution crises together, but  these interlinked crises require urgent action from the whole of society.

The United States of America back into the Paris Agreement on climate change and its commitment to carbon neutrality by 2050, strengthens global action. If adopted by every country around the world, can still prevent the worst impacts of climate change.

There is much we can do by making simply choices in our daily lives that can help our community and all communities toward a vitalization of partnership for sustainable development.

At Home and work

If we act now and change the way we manage civilization the rewards will be immense. With a new sustainable development plan, we can direct investment into policies and activities that protect people and restore nature.
The path to a sustainable civilization exists, it now needs inclusive partnerships — at the global, regional, national and local levels and we will able to solve the climate and pollution crisis and transform the world by 2030.
The Local Peace Economy joins the United Nations in its call for a Decade of Action to transform the world by 2030. The 2030  Agenda for Sustainable Development 17 goals, adopted by all United Nations Member States in 2015, provides a shared blueprint for peace and prosperity for people and the planet, now and into the future. The spirit of human endeavor has demonstrated our shared ability to deliver the extraordinary. The 17  SDGs are our best tools/hope for people and planet. The SDG Partnership Guidebook is the flagship publication of the SDG Partnership Accelerator and serves as a practical resource to help build high impact multi-stakeholder partnerships for the Sustainable Development Goals.

The Guidebook aims to convey the magic of how multi-stakeholder partnerships at country level can deliver significantly towards the Sustainable Development Goals and provide guidance on how to build robust, effective collaborations that can achieve extraordinary results.

The Guidebook sets out the key Building Block

“For too long, we have been waging a senseless and suicidal war on nature. The result is three interlinked environmental crises”, Secretary-General António Guterres told a virtual press briefing on the UN Environment Programme (UNEP) report, Making Peace with Nature.