Women’s boat to Gaza: a message of hope and solidarity

In 2018, the Freedom Flotilla Coalition will sail once more against the illegal Israeli blockade of Gaza, for freedom of movement and the right to a decent future for all Palestinians.

Israel has maintained an inhumane and destructive blockade of Gaza for over a decade. The United Nations now says that Gaza will become uninhabitable by the year 2020 because of the Israeli blockade of Gaza.

Four women from CODEPINK will travel to Barcelona, Spain in mid-September for the send-off of the boat on its trip around the Mediterranean before heading for Gaza.  Women’s Boat to Gaza (WBG) is a Freedom Flotilla Coalition (FFC)* initiative. By launching a women’s boat, women from all over the world aim to highlight the undeniable contributions and indomitable spirit of Palestinian women who have been central within the Palestinian struggle in Gaza, the West Bank, inside the Green Line and in the diaspora.

Gaza has been under Israeli blockade for the past decade, during which time Israel has also launched countless attacks against the besieged population, turning their life into a nightmare and a continuous struggle. The blockade denies Palestinians in the Gaza Strip their basic human rights, in contravention of International Law. It severely limits their possibility to import and export merchandise and to travel in and out of their country. It denies them access to their agricultural lands and fishing grounds. The blockade is a form of collective punishment, which deprives the inhabitants the possibility to support themselves, security of food supplies, medical care, education, drinkable water and cultural exchange.  Through the Freedom Flotillas and other naval missions has brought international attention to their suffering. 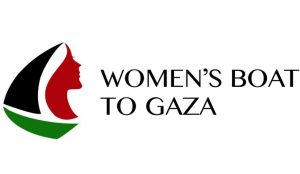 The Freedom Flotilla Coalition has launched the Women’s Boat to Gaza because they believe that it is essential to highlight the vital role women play not only in the resistance movement, but in the survival of the Palestinian people as a whole. Palestinian women have played a key role in community organisations and mobilization since the first Intifada in 1987. Women’s influence was facilitated by a commitment to grassroots as opposed to military mobilization, a strategy that was particularly attractive to women given gendered constraints on political activity. In the beginning, women were given training and means to support their own households and participate in the uprising. New organisations were formed to fill in the gaps in services resulting from the struggle to keep their neighborhoods and families together. When neighborhood committees were outlawed in 1988, women formed other informal and formal groups. Some women working for the Palestinian National Authority (PA) and other formal organisations. However, because of the occupation, many other women work informally with their labor largely unrecognized. The FFC intends to raise awareness about the ongoing struggle that women in Gaza, in the West Bank, inside the Green Line and in the diaspora, have waged and continue to wage against the Occupation.

Some of the participants from around the world that have been selected to be part of the Women’s Boat to Gaza include:

While the focus is on opposing the blockade against the Palestinian people of Gaza, FFC views this in the larger context of supporting the right to freedom of movement for all Palestinians. The Occupation daily violates the rights of Palestinians to move freely around their country and to leave and return to their country, as guaranteed by the Universal Declaration of Human Rights. They also support other broad-based demands for Palestinian rights based on International Law, including:

The WBG seeks not only to challenge the Israeli blockade, but to also show solidarity and bring a message of hope to the Palestinian people.  The FFC has been challenging the illegal and inhumane Israeli blockade of Gaza for many years and are committed to continue the struggle until the blockade is unconditionally lifted and Palestinian people everywhere realize their full rights.

The international Freedom Flotilla Coalition (FFC) is a grassroots people-to-people solidarity movement, composed of campaigns and initiatives from all over the world, working to end the illegal Israeli siege of Gaza peacefully. Within this struggle, women and men play equal roles. In this particular project, women will take on the major role of confronting the Israeli Occupation Force (IOF). This does not minimize in any way the role that men take throughout the planning and implementation stages of the project. FFC was formed after the 2010 Freedom Flotilla mission, to coordinate action between many different campaigns in their efforts against the siege of the Palestinian people of the Gaza Strip.  Every initiative that the Freedom Flotilla Coalition has launched has been grounded theoretically and practically within the framework of non-violence.  They choose always to counter oppression using non-violent strategies.

There will be at least two boats and they will stop at several ports in the Mediterranean Sea, before heading towards Gaza, in order to raise awareness about the terrible effects of the illegal Israeli blockade of the Palestinian people of Gaza.  Stay tuned for a stop near you! On 14 September 2016 the Amal-Hope will depart from Barcelona, Spain.

Be a part of this journey for peace and justice in Palestine by donating to fund the Women’s Boat to Gaza! Every $5 brings us one mile closer to reaching the families in Gaza.

Through our continued efforts we know that we can be successful in ending Israel’s human rights abuses.