Sept. 30 – Oct, 6, 2018
by Toby Blomé
4th Annual SHUT DOWN CREECH:
“STOP the Murder, STOP the War Crimes”
7 protesters arrested while blockading Creech Assassin Drone Base…Just a week later over75 Somali militants were killed in a single U.S. drone attack!
On Thursday, October 4th, as part of this fall’s CODEPINK weeklong anti-drone protest at Creech Assassin Drone Base, 7 protesters and a couple of supporters bravely stepped across the base entrance road to temporarily “halt” the cruel and illegal U.S. Air Force’s “remote killing machine” located in the beautiful Nevada desert. While holding large banners across the roadway, our voices repeatedly called out as loudly as we could muster: “STOP the murder, STOP the War Crimes……The People Demand Peace!”
On Oct. 12, just one week later, a U.S. drone strike murdered “about 60” Al-Shabaab fighters in Somalia; The NY Times reported4 DAYS AFTER the attack.  The NY Times used the kinder word, “killed.”  Later, Somali officials said over 75, mostly new recruits, were “killed” by two U.S. drones. But, hey, who’s counting?  What’s another 15 young black dead men?  Whose young brothers, sons, grandsons or nephews were sacrificed?  Who grieves?  Whose tears and wails will we never see or hear?
What young brothers, sons and cousins of the new dead will soon become the next  Somalia militants fighting against U.S. Imperialism?

That night at the University of Nevada, Las Vegas, we had a film showing of “National Bird,” followed by a superb presentation by Ray McGovern:  “Ethical and Legal Challenges Facing Drone Warriors.”  As a former CIA analyst under several presidential administrations, Ray had firsthand experiences and insights to add a fresh perspective to the U.S. drone program.  www.RayMcGovern.com

Later in the week, one vigil theme was:  “WAR IS A LIE,” and identified the misinformation apartatus that keeps Americans in the dark: “The President Lies,” “Congress Lies,”  “Generals Lie,” “Media Lies,” “The CIA lies.”

Another morning’s vigil theme focused on the environmental threats of global militarism:  “The U.S. Military = #1 Polluter,” “War is Toxic to Our Mother,” “War is Toxic:  Depleted Uranium, Cancer, Nukes, Fossil Fuel, Napalm…”  etc.”  In the afternoon we modeled to the troops in a joyful way, how to care for “Our Mother” by tossing a giant Earth Ball up high into the air with a large colorful parachute, as they were exiting the base.
By the end of the week we had made a huge impact at Creech assassin drone base.  How many important conversations were had that week because of our presence?  We also had successful and broad national media coverage through a very short AP story that was picked up in nearly 20 states. (see below).
Norie Clarke volunteered to compose a letter to the Commander of Creech Air Force Base, with assistance from others.  Her letter is here:
This letter was signed by all of us, and was to be handed over to the police during our arrest.  The police refused to accept our letter or deliver it to the Creech Commander. We will find another way to deliver it.
We also wanted to draw attention to the 17th anniversary of the U.S. Invasion and continued Occupation of Afghanistan (October 7), an endless war that has left hundreds of thousands of Afghans dead, and tens of thousands with amputations and other injuries.  Afghanistan is the most droned place on earth. During our protest that day we wore sky blue scarves, symbolic of the Afghan Peace Volunteers’ global campaign to Abolition War.  Just prior to our blockade on Thursday, Col. Ann Wright gave a very eloquent rallying speech, with an amplified system, about the violations against the people of Afghanistan, from the 17 year U.S. bombing campaign there.
Brian Terrell also spoke poignantly into the speaker system in hearing range of nearby police and military.
For more on the Afghan Peace Volunteers:    www.OurJourneyToSmile.com 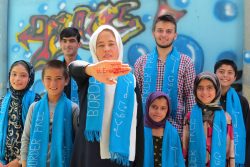 Why must the richest country on earth continue to wage war on Afghanistan, one of the very poorest countries on earth?  The Taliban are as vulnerable to drone strikes as Al-Shabaab Somali militants are.  Neither have an air force or any other air defense system, and thus they have no way to defend themselves against the unannounced Hellfire missiles that can rain down on them at any moment.  They are literally “sitting ducks” on the ground.  It’s quite amazing that the Taliban and Al-Shabaab forces continue to fight back against the U.S., with even more determination, in spite of the great technological disadvantage that they have.  Drones are the tools of an oppressive empire, used to control the most vulnerable populations of the earth, and to dominate the global political arena.
We celebrate the courage of whistleblowers like Chelsea Manning, who risked her own well-being and suffered terribly under the iron heal of the punitive military injustice system, because she dared speak out against the “assymetry of warfare,” which she voiced was a major motivator for her decision to leak the truth to the public.
We will continue to return to Creech Air Force Base twice annually, Spring and Fall, to make a strong stance against the injustice and inhumanity of it all.  Please join us when you can.
We hope you will be inspired to keep working for peace & justice by remembering this quote by James Baldwin, Black American writer:
“As long as white Americans take refuge in their whiteness, they will allow millions of other people to be slaughtered…”.
(Letter to Angela Davis, while she was serving jail time.)
Let us work together to stop the slaughter!
Toby, Eleanor and Maggie
Bay Area and Flagstaff CODEPINK!