A Book Review: The Living Goddess 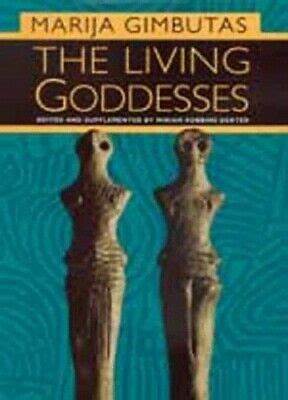 The book is about the time, when God was worshipped as female in Europe and Asia Minor, between 7000 B.C.-3000 B.C., her violent suppression by male gods and its effects on today’s society. This book was Marija Gimbutas last work, it a synthesis of her work on the religion of the Living Goddess before and after patriarchal Europe. Marija Gimbutas was a professor of archaeology at UCLA and internationally known her research into ‘Kurgan” and “Old Europe” culture. Her work showed that the Kugan culture was a Proto-Indo-European pastoral patriarchal warrior society that rode horse, built forts, worshipped male warrior gods and weapons. That expanded from the Russian steps into homelands of Old Europe and suppressed their culture with force. The Old Europeans were matriarchal agriculturists who lived without weapons, worshipped the Living Goddess and sanctified life and the earth. As the two cultures fused to form modern European society, women and the goddess were made subservient to males and their warrior gods. Yet Old European religion and customs remained a strong undercurrent that influenced the development of Western Civilization. This book will help you to recognize her symbols, learn their meaning and realizes that the goddess lives today.  In today society the concept of Mother Earth, the cycle of life, the mother that gives birth to life, nourish it, receives its dead and lives in balance, is our inheritance from Old Europe.

The book is divided into 2 parts. Part 1 describes the religion of the living Goddess in its images of the Goddess, her symbols and script. How she was worshipped in temples and ceremonial centers and discusses her matrilineal social structure. In part 2, she covers Old European Religious Continuity through historical times into Modern Times. This book review is an attempt to paraphrase and summarize some of her final thoughts on the religion and culture of Old Europeans and Indo-Europeans and how their merger created and affects modern religion and culture.

In Old Europe religion people worshipped the Goddess, or a goddess, in many forms. The Goddess’s religious myth focused on the wheel of life and its cyclical turning.  It encompassed birth, nurturing, growth, death and regeneration, as well as crop cultivation, and the raising of animals. The divine-both goddess and gods-was represented by many images, animals, human and abstractions. The living Goddess religious symbolism represent the full cycle of the life continuum. The pregnant vegetation goddess, the earth mother, was frequently unearthed near bread ovens. She personified the analogy between human and animal pregnancy and the annual cycle of plant germinations, growth and harvest. Old European mythic symbolism was rich and varied.

When the Old Europeans discovered how to fire pottery, in the seventh millennium, it provided a new way to express religious ideals. Ancient artisan crafted a variety of ceramic forms-vases, figurines, and ritual implements-in human and animal form that displayed the spiritual symbols of Old Europe.  Many were marked with symbols that represented an ancient form of script. Symbolically schematic figurine, often nude, depicted the sacred force that emphasizing the divinity of the nurturing breast, the pregnant belly or the life-giving vulva. The goddess of birth and life was also a goddess of death and regeneration and was often depicted as bird of prey. The images of the goddess and symbols taken together represent the eternal cycle of birth, life, death and renewal.

During the sixth millennium B.C., the Old Europeans developed a writing system; writing grew out of their religious symbols and signs. These symbols and signs that carried various symbolic meaning had its roots in the Paleolithic and persisted for thousands of years until the emergence of the Old European Script in the archaeological record around 5500-5000 B.C. Abstract, not pictorial, signs comprised the script. Linearity characterizes and organizes Old European writing, a trait it shares with the Minoan Linear A, Cypriot-Minoan, and Cypriot Syllabic scripts, all scripts of the pre-classical world. This script predates the earliest historical writing of- Sumer and Egypt-by thousands of years. The continuity of the Old European writing was disrupted by the arrival of the Indo-Europeans, thereafter, writing disappeared along with the manufacture of finely wrought polychrome pottery and other attributes of Old European culture.

The funerary monument, tombs and graves, show that death was part of a cycle that included birth. Many tombs have a central passage, perhaps evocative of the birth canal.  Old European view of the processes of death and transition fundamentally differed from the view of death held by ancient Indo-European and Christian religions, a person’s soul maintained its individual identify and traveled to the land of the afterlife. In Goddess religion, as in the organic world, new life grows from the remains of the old, a plant dies its seed lies in dirt to grow again, the processes of death and transition were cyclical. Symbolically, the individual returned to the goddess womb to be reborn. Exactly what this rebirth was imagined to take is unknown. Tombs reveal the holistic spiritually of the culture.

Modern Archaeology have revealed that centers of worship-temples- existed in Europe and Middle East more than five thousand years before the classical eras of Greece and Rome. Religious life centered on the temple from the seventh millennium onward. The Old European temple featured an altar. Figurines were placed on the altar along with ritual implements such as bowls, dishes, ladles and incense burners. The temple goddess image appears as a wall relief, on a vase or a grand sculpture standing on a podium. Rituals were performed around functions associated with the goddess: birth, the renewal of life after death, fertility for humans, animals and the earth. Temples integrated women’s daily activities, particularly bread baking, cloth weaving and pottery making into scared practice. The temple sanctified everyday activity. In Old Europe people did not separate the scared from the mundane. The scared force imbued every activity.

The construction of the pre-Indo-European social structure of Old Europe is possible if various sources from different disciplines are used: linguistic, historical, mythological, religious and archaeological. Evidence from these disciplines show that the Old European social structure was matrilineal, with the succession to the throne and inheritance passing through the female line. The society was organized around a theocratic, democratic temple community guided by a highly respected priestess and her brother or uncle, a council of women serving as a governing body. The male element in goddess symbolism stimulates and enhances life, particular plant life. They are important part in the process of becoming but do not actually create life, it was the female force that pervaded existence. In all of Old Europe, there is no evidence for the Indo-European type of patriarchal chieftainate, with its emphasis on warfare and the value of weapons, which is mirrored in religion by warrior-deities and in religious symbolism by the emphasis on weapons, the sword of God.

The upheavals that followed the Indo-European infiltrations into Europe from 4300 to 2900 B.C. transformed different regions at different times and to differing degrees. Indo-European language, beliefs and social structure predominated, but they did not eradicate indigenous Old European who remained agriculturalists and craftspeople, retaining their religion beliefs and customs. In geographical areas where Indo-Europeans assimilated with Old Europeans, the pastoral Indo-Europeans became the ruling warrior caste, their language, beliefs, social structure predominate and the role of women in society was diminished. The Old European cultures of Crete, Greece, Etruscans of central Italy, Celts of central Europe, Britain, and Ireland exemplify this case, as do the Baltic, Slavic and Germanic cultures to a certain degree. Greece will suffice as the culture I picked from her discussion of these cultures to describe the decent of the goddess from the Bronze Age into modern times.

By time of the Classical period, 500 B.C., the Greek religion pantheon of goddesses and gods had been removed from the earth and transferred to lofty Mount Olympus. The goddess, Athena made her way into the Greek pantheon and became Athens official goddess, yet it was the male deities who dominated both Mount Olympus and the human world. Their primary ruler was Zeus, a form of the Indo-European sky and thunder god as was Thor. In ancient Greek literature Zeus rapes hundreds of goddesses and nymphs. These rapes in the divine sphere may have reflected the brutal treatment of Old Europeans mortal women during the transition from prepatriarchy to patriarchy. The goddess lost her power to create life without male and became brides, wives and daughters of the Indo-European gods; the goddess and females were made subservient to males and their male gods. The female image was diminished from one of physical power to one of a frail beauty and physical weakness. This notion of female deficiency, present in both religion and society, would be inherited by modern western cultures. It continues to plague secular and religious art up to our times.

With this we conclude our survey of The Living Goddess. The book demonstrates that a culture existed where patriarchy did not rule, war and violence was not assumed as a cultural norm and that there were, in fact, egalitarian social structures, with a written language and a legacy living goddess symbolism of birth and life giver and death and regeneration, mother earth. The lesson to be learn from this book that if we are to build a more egalitarian society, as some our ancestors had, we need to become a weaponless civilization that honors women and men equally as well as female and male gods.