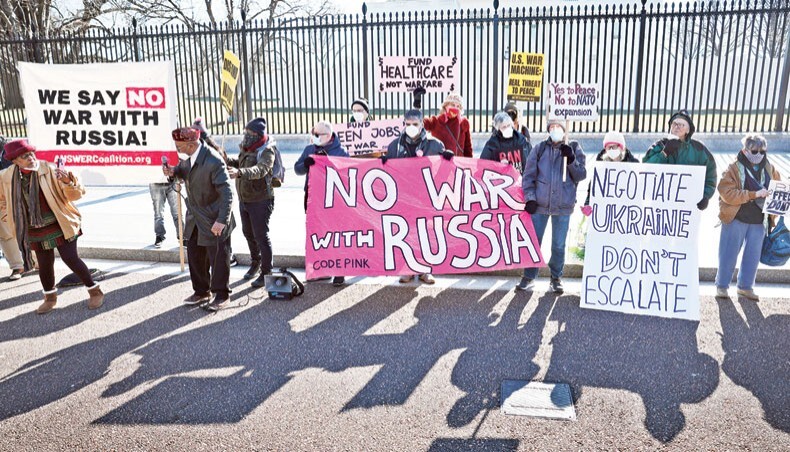 Join us for two actions against war with Russia:
11:30am-1pm (PST): Leafleting and Bannering, NO WAR with RUSSIA!
Where: Ferry Bldg., San Francisco, at the foot of Market Street
2-3pm (PST): Press Conference at Pelosi’s house
Where: 2640 Broadway, S.F., 1 block east of Divisadero
*Group rides will be arranged for those who need them from the Ferry Bldg. to Pelosi’s
Join us from 11:30am-1pm to speak out against an unnecessary war with Russia which could possibly lead to the use of nuclear weapons. We’ll have banners, posters, an information table and flyers asking people to take action!
Then, join us from 2-3pm for a press conference at Nancy Pelosi’s house. Our message to Pelosi: “Please explain why you are fast-tracking H.R. 6470 to ship $500 million in weapons to #Ukraine risking a dangerous military confrontation with Russia. Your constituents deserve to know.”
Sponsored by CODEPINK. Endorsers include Veterans For Peace San Francisco chapter #69; San Francisco Bay Physicians for Social Responsibility; Green Party of Alameda County; the Berkeley Fellowship of Unitarian Universalists Social Justice Committee, others. For more information contact cynthia_papermaster@yahoo.com, (510) 365-1500.
Other urgent actions:
We are on the brink of a massive war between the US and Russia—two nuclear-armed states. The time to speak out is now! The Russian people don’t want war; the Ukrainian people don’t want war. And we don’t want our soldiers to die in an unnecessary war with Russia! “We demand true discussion, dialogue, diplomacy on steroids instead of war-mongering to save the lives of the innocent civilians that are at stake around the world.”  Col. (Ret.) Ann Wright