Yesterday….A Glorious Day for Peace!
OUR RETURN TO THE GOLDEN GATE BRIDGE:
With possible rain and high winds predicted, and a good cloud cover in the early morning we didn’t know what we were up for, but the clouds parted, the sunshine goddesses showed up, and though the wind gusts were fierce at times, it couldn’t outdo our voracity for world peace on Mother’s Day!
It was a beautiful return to the bridge after being away for an entire year due to pandemic, and so great to see the “old-timers” and many new comers.  About 2 dozen activists participated, including Renay Davis’ children and grandchildren and Marie Bravo led a public recital of Julia Ward Howe’s Mother’s Day Proclamation via “mike check.”  Francis Collins offered songs, including Lennon’s classic, Imagine.
Check out Martha’s Facebook Photos HERE.
Mercury News and KTVU reporters showed, as well as a KCBS reporter, resulting in this brief Interview with Renay & Toby.
In addition, several independent media covered our demo, including a Columbian journalist who asked very thoughtful questions around war & peace.
It was a precious and very successful effort in the spirit of peace and we some of us expressed interest in returning on a monthly basis next month.
Lastly, we were especially delighted to have Renay Davis back with us, as seen in this photo with her daughter Micaela and is that grandson Clay or Benito hiding under that cap???
Thanks to all who joined us….Onward for peace & justice for all!
(Photo by Martha Hubert) 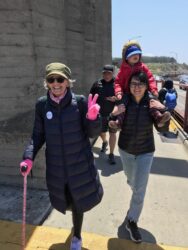