Fantastic week of drone resistance at SHUT DOWN CREECH!
Incredible and committed peace activists from coast to coast contributed in amazing ways.
3 out of 5 mornings included “soft blockades” that impeded commuter traffic into Creech killer drone base, communicating to the military that the drone crimes being committed daily at Creech in the Nevada desert are intolerable, illegal and must be stopped.  We honored the courage of drone whistleblower, Daniel Hale, throughout the week.  Daniel faces up to 10 years imprisonment for leaking classified military documents that exposed war crimes of the secret U.S. drone program.  His sentencing trial is in July.

END_OF_DOCUMENT_TOKEN_TO_BE_REPLACED

April 6, 2021, Tuesday Night
by Toby Blomé
It’s been an awesome week so far, with activists arriving from as far away as Florida, New York and Missouri.  Many new folks and everyone working together with great teamwork overall.  Lots to share, but for now:
–MONDAY
AM: We had an amazing non-violent direct action during the first morning vigil during commute hours, where peaceful, anti-drone protesters, made up mostly of CODEPINK and Veterans For Peace members, totally surprised law enforcement, BLOCKING BOTH GATES and causing a chaotic traffic jam and delay that lasted about 45 minutes.  “Time to break the silence amidst so much violence!”  Activists blocked the entrances for as long as they could, through the “riot act readings” by police, and just until the 2 and 3 min. warnings expired. Arrests were avoided by all due to health risks from the pandemic.  No one wants to take great risks and end up in jail right now.

END_OF_DOCUMENT_TOKEN_TO_BE_REPLACED 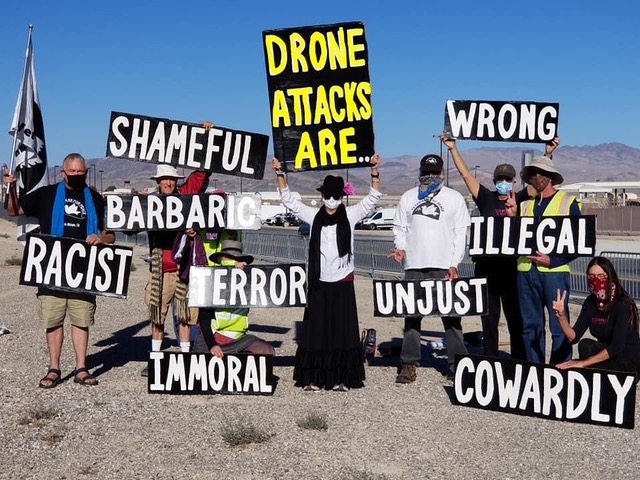 These “Burma-Shave” signs were stretched along the highway during the first morning’s commute.

“It Is No Measure of Health to be Well-Adjusted to a Profoundly Sick Society. ”  Krishnamurti

In the middle of a global pandemic, and amidst growing racial and political turmoil within our country,15 activists from California, Arizona, Nevada and New Mexico converged at Creech Killer Drone Base just north of Las Vegas.  Most were members of CODEPINK and Veterans for Peace, the event co-sponsors. For one week, in the beautiful Nevada high desert, we became a united peaceful resistance to the ultimate in U.S. global terror & violence:  militarized drones.  One of the participants, Charles Withuhn from Chico, CA, shared the Krishnamurti quote.  It expressed our motivation succinctly:  We refuse to become “well adjusted” to the brutality and inhumanity of killing people around the world with computers and satellites.  (Click on the quote above for a discussion of Krishnamurti’s words.)

END_OF_DOCUMENT_TOKEN_TO_BE_REPLACED 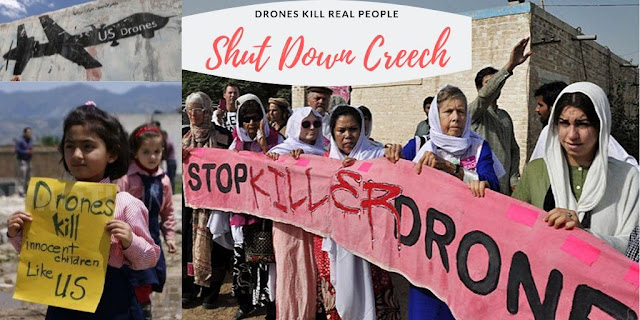 END_OF_DOCUMENT_TOKEN_TO_BE_REPLACED

Report Back: East Bay, July 4th 2020 Bannering.
By Eleanor Levine & Toby Blomé
Drawing attention to the connection between the need for demilitarization both at “Home and Abroad,” we displayed  DEFUND the POLICE and DEFUND the PENTAGON banners in both directions to motorists in Berkeley, CA, on the I-80 pedestrian overpass.  One side was accompanied with a large DEMILITARIZE banner, helping to tie the urgent needs together.  Money for Human Needs Now!  At 10 am when we arrived, 10 supporters were waiting to help banner. It was truly amazing! We stayed for over two hours enjoying the glorious weather-perfect morning while “communicating” with passersby and motorists.  Eleanor and Toby, holding the fort for the 2nd hour, passed the time playing crossword puzzles and Swedish folk music on nyckelharpa, respectively.  Hopefully we’ll be back soon….JOIN US!  Bring your instruments!