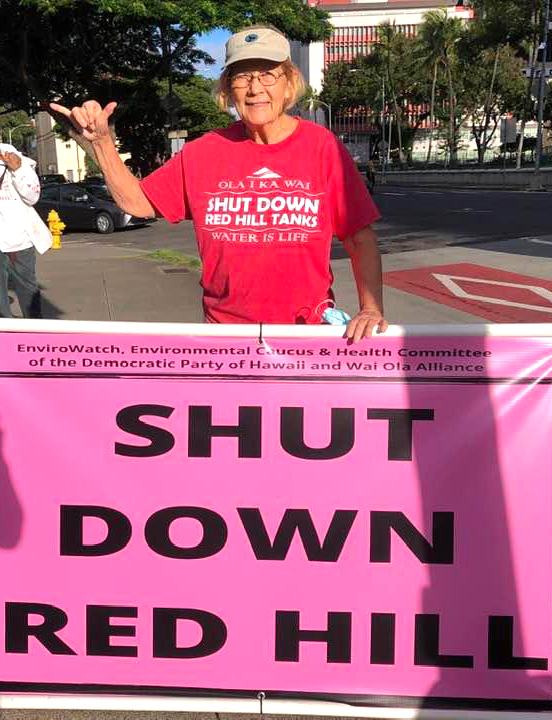 Help Ann Wright, a supporter of the local peace economy,  protect her neighborhood from pollution cause by leaking military fuel tanks. Sign the petition!

The U.S. Navy has 20 massive jet fuel tanks located only 100 feet above Honolulu’s aquifer. Because the tanks are now 80-years-old, they are leaking their poison right into the island’s drinking water. In November 2021, 93,000 persons, ironically, primarily military families, suffered vomiting, diarrhea, and rashes from petroleum in their drinking water. Many had to go to emergency rooms and pets had to be taken to veterinarians. Soon, the leaking fuel, leaking into the Pacific ocean, may reach Guam, Washington, Oregon, and California.

Please help us to permanently close down the Red Hill Jet Fuel tanks by signing this petition to President Biden and Secretary of Defense Austin.

In a hearing this week, the U.S. Navy finally admitted that 8 of the 20 tanks had not been inspected in 20 years and 3 tanks have not been inspected in over 40 years. Over 76 fuel leaks are known to have occurred resulting in the release of 175,000 gallons. A Navy analyst acknowledged that 1,000 to 30,000 gallons of fuel were expected to leak once every three years and chronic, undetected leaks could be releasing about 5,803 gallons of fuel a year.

As a retired U.S. Army Colonel, I know that the petition I’m asking you to sign will serve as an important reminder to Hawai’i State officials about prioritizing the safety and security of the people of Hawai’i, and that they must stand up to the U.S. military that is so powerful in the state.

As a 20 year resident of Honolulu, O’ahu, Hawai’i, I hope you will join me in demanding that President Biden and Secretary of Defense Austin permanently shut down the Navy’s 20 jet fuel tanks.

Thank you for taking action with me. From my beautiful home in the state of Hawai’i, threatened environmentally by the U.S. military, I wish you a safe and peaceful holiday season.

P.S. Read my latest articles about the military flushing the contaminated water, and a report from the State of Hawai’i hearing officer that calls the Red Hill tanks an “imminent peril.”

Will you chip in to help supercharge CODEPINK’s work in 2022? Your donations help us raise awareness, expose the warmongers, and speak truth to power.