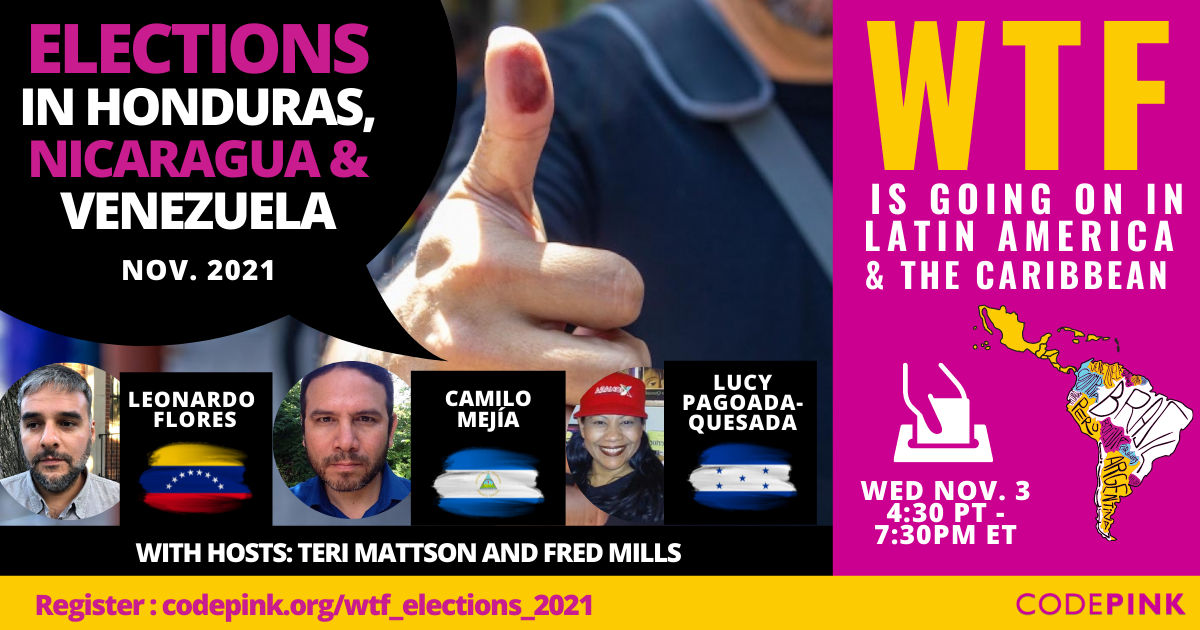 Join us Wednesday, November 3 at 7:30pm ET in conversation with political leaders and activists of three Latin American countries holding elections in November 2021.

Honduras: Lucy Pagoada-Quesada, Partido Libre
Nicaragua: Carlos Mejía, Nicaraguan activist
Venezuela: Leonardo Flores, (how would he like to be introduced for this program?)

On July 24, the 238th Anniversary of Simon Bolivar’s birth, Mexico’s AMLO addressed an audience of foreign ministers and international dignitaries. He said he wanted to initiate a relationship where some nations did not take advantage of the misfortune of others. He said,

“The proposal is no more and no less than to build something similar to the European Union, but in accordance with our history, our reality, and our identities.”

He calls for replacing the Organization of American States with a truly autonomous organization that is “not a lackey to anyone”.

Elections throughout the hemisphere during the past 12 months have been important electoral victories for the liberation and self-determination of Latin America.

October 2020 Bolivia: the Movement toward Socialism won the election and returned to power after a 2019 OAS orchestrated coup
December 2020: Venezuela National Assembly elections returned the PSUV to a majority
April 2021 Ecuador: conservative banker Guillermo Lasso won the presidency, ensuring the continuation of neoliberalism despite popular upheavals.
June 2021: Peruvians elected a former school teacher and union leader to be president marking the end of the reactionary Lima Group.
Also in June: Mexico held regional elections, the largest in the history of the country. Support for AMLO’s MORENA party remains high.

The overall trend seems to be moving away from US hegemony and towards greater autonomy and independence. One example: throughout the hemisphere, countries want to be able to trade with Russia and China and not exclusively with the US. That includes Ecuador’s neoliberal president.

There are crucial elections coming up very soon:

Among a mix of political ideologies, Latin America and the Caribbean are witnessing a distinct evolution towards regional cooperation, multilateralism and leadership that puts people over profits.