What is the Green Economy?

The Green Economy is a democratic long term planning approach to managing the environment, business, government and the world economy. A Green Economy is an inclusive economy, where environmental resources and the wealth generated by them are shared in a more equitable way. An inclusive economy does not exploit the environment for just a few individuals or corporations; but manages it in a sustainable way that benefits society as a whole. The United Nations Environmental Program (UNEP) defines a green economy as “one that results in improved human well-being and social equity, while significantly reducing environmental risks and ecological scarcities.”

The Green Economy is a UNEP led initiative launched in 2008 to raise the visibility of this concept, particularly through a call for a Global Green New Deal (GGND). The GGND recommended a package of public investments and complementary policy and pricing reforms aimed at kick-starting a transition to a green economy while reinvigorating economies and jobs and addressing persistent poverty.

The 2012 Rio+20 Conference, 20 years after the earth summit, outcome document, The Future We Want, requested UN support for the “the implementation of green economy polices by countries that seek to

apply them for transition towards sustainable development as a common undertaking.” The UNEP has been active in this regard, partnering with numerous UN members and civil society partners to respond to country requests as to how sustainable development goals can be met and exceeded in 2015 and beyond. Momentum is building for a Greener and a more inclusive economy. 65 or a quarter of the world’s countries are now pursuing green economy related strategies and 48 of them are taking steps to develop national green economy plans.

In early 2014 UNEP launched The Inquiry into the Design of a Sustainable Financial System, which is looking at how to transition from the prevailing brown economic paradigm where capital is poured into property, fossil fuels, and structured financial assets with embedded derivative, to a new green economic paradigm where fiscal resources are invested in renewable energy, energy efficiency, public transportation, sustainable agriculture, ecosystem and biodiversity protection, and land and water conservation. 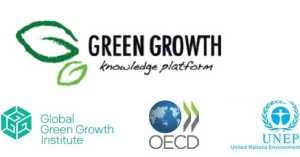 January 29 through 30 2015 at the University of Venice the UNEP held its Third Annual: Green Growth Knowledge Platform (GGKP) Conference on the theme of “Fiscal Policies and the Green Economy Transition: generating Knowledge – Creating Impact”. The GGKP is a global partnership of 36 leading organizations working to collaboratively identify and address major knowledge gaps in green growth and practice.

One of the myths the GGKP wishes to refute is perhaps the most widespread one that there is an inescapable trade-off between environmental sustainability and economic progress.  There is now substantial evidence, as the UN Green Economy Report demonstrates that the “greening of economies; neither inhibits wealth creation nor opportunities for investment and related growth in wealth and jobs.”

China is demonstrated proof of this proposition, having followed the brown economy thinking as a growth model in an effort to join the global economy and improve the lives of its citizens; followed the brown economic model idea that pollution prevention is bad for the economy. This theory has produced one of the most polluted countries in the world. The World Bank in 1997 estimated that air pollution costs China 8% of its GNP. As with brown economics the majority of the wealth generated by that growth has gone to a relative small percent of the population. China, chocking on its own air, has realized the need to transition from the old brown economy to the new green economy to improve the lives of its citizens; “one in which material wealth is not delivered at the expense of growing environmental risks, ecological scarcities and social disparities.”

People ride along a street on a smoggy day in Daging, China. The air pollution is 15 time the level deemed safe by the World Health Organization. Image Telegraph UK News.

China has developed, with UN cooperation, a pathway to a Green Economy: The 12th Five-year plan for National Economic and Social Development (2011-2015) seeks to promote “inclusive growth.” The plan’s key themes are rebalancing the economy, reducing social inequality and protecting the environment. Under the current 5-year-plan US$ 468 billion was invested in three key green economic sectors: waste recycling and reutilization; clean technologies, and renewable energy. China’s environmental protection industry is expected to continue growing at an average of 15-20% per year and its output is expected to reach US$ 743 billion during the 13th five-year plan. China’s green stimulus is the largest in the world and has made them the largest Solar PV manufacture in the world and number 2 on the list of countries using solar power.

If China had followed green economics as a growth model their air would be clean, the generated wealth would have been more equitable distributed, growth planned; its people would have a better well-being and a more economic secure future. Countries around the world are beginning to understand the need to plan a green inclusive growth future, that it is cheaper, safer and more economic beneficial to prevent pollution and keep a resource ready for reuse then paying to clean up a brown mess and the associate health costs of a polluted environment.

GGKP identified another gap in green growth and practice; an era of capital misallocation. During the last two decades, much capital was poured into the brown economy of short-term profits, but relatively little in comparison into long term sustainable growth, some 7% was subject to the integration of environmental, social and governance (ESG) investment considerations of the green economy. The concentrated pools of assets, such as those controlled by pension systems and insurance companies, in the US $39 trillion and $178 trillion-plus worldwide managed by the high net worth community of the brown economy; the growing assets of these sovereign wealth funds need to be transition to the green economy so that the world cannot only eradicate poverty in the coming decades, a UN millennium goal, but make life better for all citizen around the earth.

The UN states to create an inclusive economy the right policy tools are needed by governments to set out a clear pathway for business and finance to follow. The UN Green Economy Report is a blueprint to begin the transition from a brown economy to a green economy. The UN Green Economy Reports concludes: “A green economy can generate as much growth and employment as a brown economy and outperforms the latter in the medium and long-run while yielding significantly more environmental and social benefits. Of course there are many risk and challenges along the way. However, the biggest risk of all is to remain with the status quo and not engage in a transition towards a green economy. Moving towards a green economy will require world leaders, civil society and leading business to engage in this transition collaboratively. It will require sustained effort on the part of policy makers and their constituents to rethink and redefine traditional measures of wealth, prosperity and well-being.”
This really is about the Future We Want as we the people worldwide. A green future will require citizens telling their governments to begin developing plans to transition to inclusive economies. A Green Economy is a tool of democracy where capital is put to work for the people creating an economic democracy that ensures a more beneficial sharing of the earth’s wealth. At the same time protecting and building a sustainable environment for future generations to use and enjoy. Democracy is the many helping each other, be economic secure, not just a few.

The UN Democracy Fund Promoting the Participation of Women in Politics and Public Affairs Madagascar.

The Peace Collective was created and started by the twenty-somethings at CODEPINK for the young folks (up to age 29) that want to become a part of the peace movement, raise hell, and just do some cool[...]
View Calendar
Add