Everyone is invited to join CODEPINK in it’s Campaign of Non-violent Actions to Ground Killer Drones. The drone era of endless war began in  2001 with the US invasion of Afghanistan. Since 2009 CODEPINK along with dozens of protesters  have been arrested at drones bases worldwide demanding the U.S. government stop the indiscriminate killing, injury, and trauma to civilians in Pakistan, Afghanistan, Somalia, Iraq, Yemen, Syria, and Libya caused by drones and to help rebuild hospitals, schools, towns, people’s lives destroyed and who are still living under the daily terror of  remotely controlled U.S. militarized drones. After 21 years it is time to stop Americas killer drones and  endless war.
Twice a year CODEPINK has a national gathering at Creech AFB, the brain of the killer drone network, in an effort to Shut Down Creech, co-sponsored with Veterans For Peace. Its spring action 2022 is coming in March. 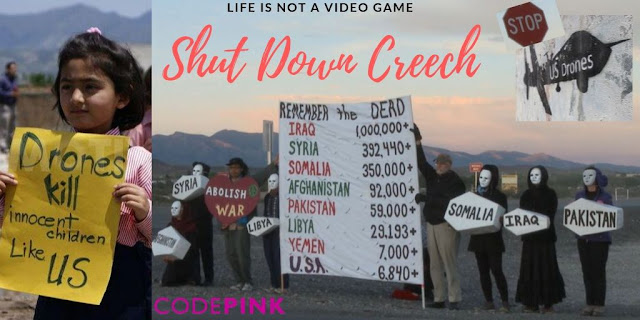 13th annual Spring Action:  March 26- April 2, 2022
(Saturday through Saturday)
Our 2022 weeklong spring convergence to resist U.S. killer drones in the Nevada desert has been scheduled for March 26- April 2, 2022! We can’t wait to work together again to nonviolently oppose the barbaric and deadly U.S. drone assassination program at Creech AFB that terrorizes communities around the world.
Planning to Come?  Please REGISTER HERE, even if your plans are tentative. as it helps us better prepare.  Join us for a week of joyful convergence, resisting drones and militarism, one vigil or blockade at a time!
Our Spring Action is again dedicated to The Ahmadi Family,who lost 10 beloved family members, including young children, by this reckless U.S. drone attack on August 29, 2021. Broken promises: Though the Pentagon promised condolence payments and assistance for relocation to the U.S., to this date the Ahmadi family have received no reparations. We stand with all Defenseless Drone Victims living under and terrorized daily by U.S. Drones.
STOLEN LIVES:  The 7 Ahmadi Children, killed by U.S. drone attack on Aug 29, 2021

We thank all the courageous drone whistleblowers, whose actions helped give a voice for the voiceless drone victims around the globe. Drone whistleblower Daniel Hale is currently serving 45 months in jail for exposing the truth. Learn more and support Daniel Hale at: StandWithDanielHale.org.
OUR DEMAND: Prosecute all drone base commanders and higher up U.S. officials most responsible for drone war crimes. Pardon Daniel Hale, who exposed the drone war crimes!  FREE DANIEL HALE NOW!
Due to the persistent pandemic, we will continue to follow Covid safe precautions.  All activities will be held outdoors, including overnight camping.
CHANGES:  As the Covid pandemic wanes and mandates are lifted, we are making a few small changes.
-Although the event will be mostly an outdoor event, we are offering a few beds for those most in need, one person per room.  Put in your request early!
For bed reservation requests:    MaggieHuntington32@yahoo.com
-Check Out our Updated COVID GUIDELINES for steps we are taking to help keep us all safe
IMPROVEMENTS:
-Nonviolence training planned early in the week!
-Efforts are being made to get NLG legal observers present during our civil resistance, to minimize police misconduct!  Keeping fingers crossed.  We are planning a nonviolent civil resistance action mid-week, interrupting the drone war machine, but will avoid arrest by ending blockade when police warning time runs out. Participation optional.
-Check out our new GOALS & CORE VALUES for Shut Down Creech, developed after intense discussions with new and longtime Creechers.  These are still in development, but we want to share them with you here:
We are especially appreciative of Veterans For Peace staff members who participated in these discussions, and helped us to identify a large void in our ongoing Creech work that needed addressing:  We need more purposeful and concrete efforts to do outreach to Creech personnel to foster GI support and Resistance.
Hope you will join us!
For more information on housing, meals, transportation and more visit us at:   ShutDownCreech.blogspot,         REGISTER HERE
FMI:  Please contact: Toby Blomé and Eleanor Levine.
Together we are PEACE! SHUT DOWN CREECH NOW!
CODEPINK dreams of an open sky free of killer drones so we  resist, love, dance and work with our peace partners to build a critical mass movement to abolish war and create a green nonviolent world! Join US!