How We are Fighting the War Machine Locally 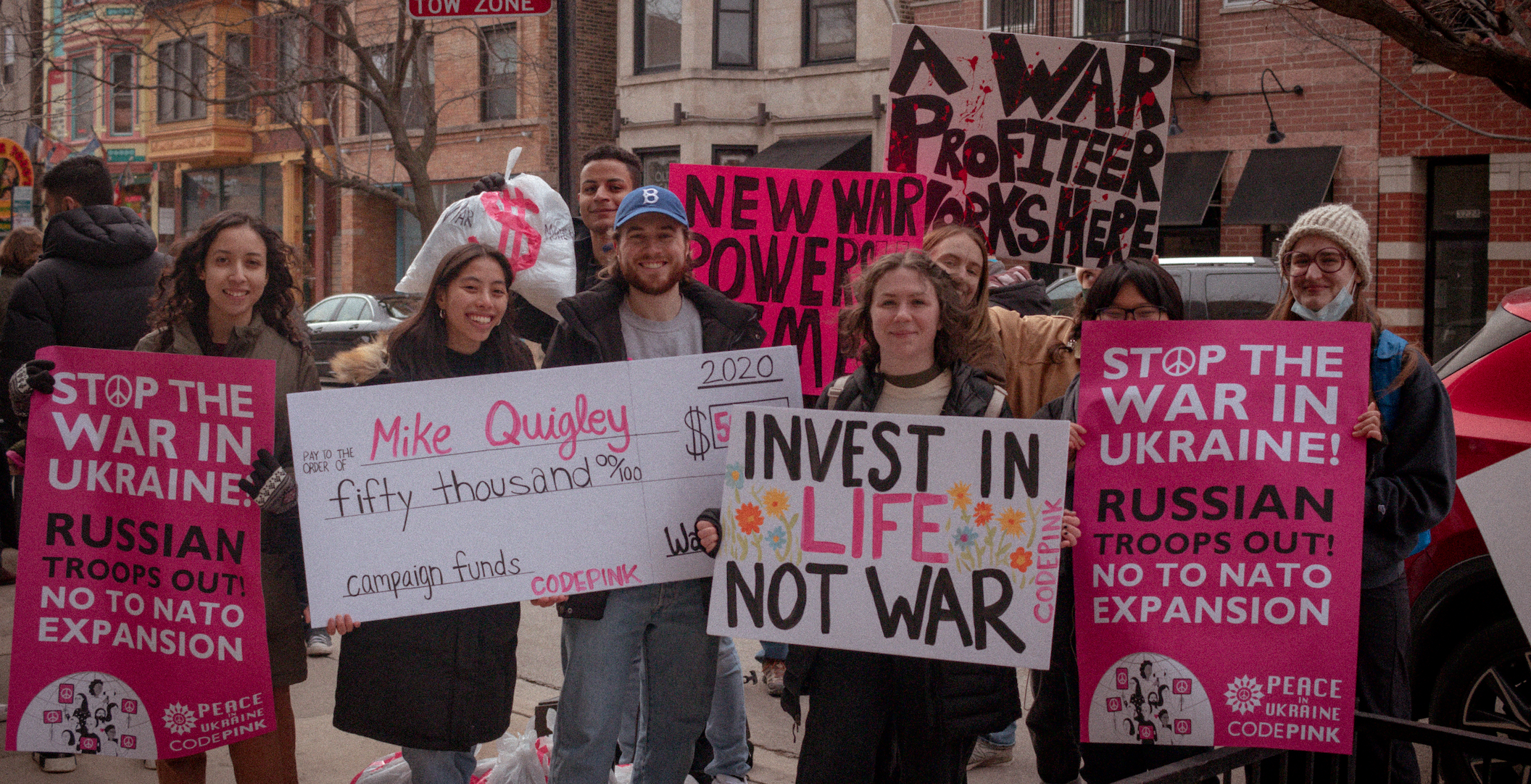 All photos by Benjamin Cardinal

Imperialism is a large issue to take on as student activists. We sometimes feel like we only have access to small levers at the city level, and then even smaller levers at the university to enact change. For anti-war groups like mine in Chicago, we’ve had to get creative with how we address imperialism locally. For us, it has meant taking on war profiteers in our own city. Last Friday on March 4th, a large alliance of Chicago organizations protested outside of Congressman Mike Quigley’s office to demand that he refuse campaign donations from weapons companies. While so many other demonstrations in the neighborhood go unbothered, we were met with a disproportionate police presence and harassment by the Chicago Police Department. However, that did not stop us from getting our message across. With a large turnout, several news outlets in attendance, and chalk on the sidewalk with words saying “Divest Mike,” many were able to see and hear our demands. The time is now for Quigley to hear us as well.

DePaul University students, whether they live on or around campus, are represented in Congress by Mike Quigley. Quigley took office in 2009 to represent Illinois’ fifth-district after a special election to fill the seat that Rahm Emanuel vacated to serve as Barack Obama’s chief of staff. Quigley was able to advance to the general election with 22% of the vote.

In comparison to the representatives of the districts surrounding IL-5, Quigley is in sharp contrast. These representatives are Chuy Garcia, Jan Schakowsky, Marie Newman, Bobby Rush and others. Representatives Garcia, Schakowsky and Newman are members of the Congressional Progressive Caucus, while Quigley is not. Quigley’s politics has created tension with the immensely progressive student body he represents at DePaul, including the organization I am a part of: Chicago Area Peace Action DePaul (CAPA DePaul). This tension was first apparent in the spring of 2021 when a large group of students, including CAPA DePaul, started challenging Quigley for being the only Chicago Congressperson against Medicare for All. Our group, called “Medicare4Mike,” stood outside of Quigley’s office every single day for three weeks in March of 2021, pressuring him to cosponsor Medicare for All. Our pressure proved to be successful as Quigley became the 114th cosponsor of Medicare For All following our three week stand. We even gained the attention of former presidential candidate Marianne Williamson, who said, “This is how activism works” in response to our advocacy. 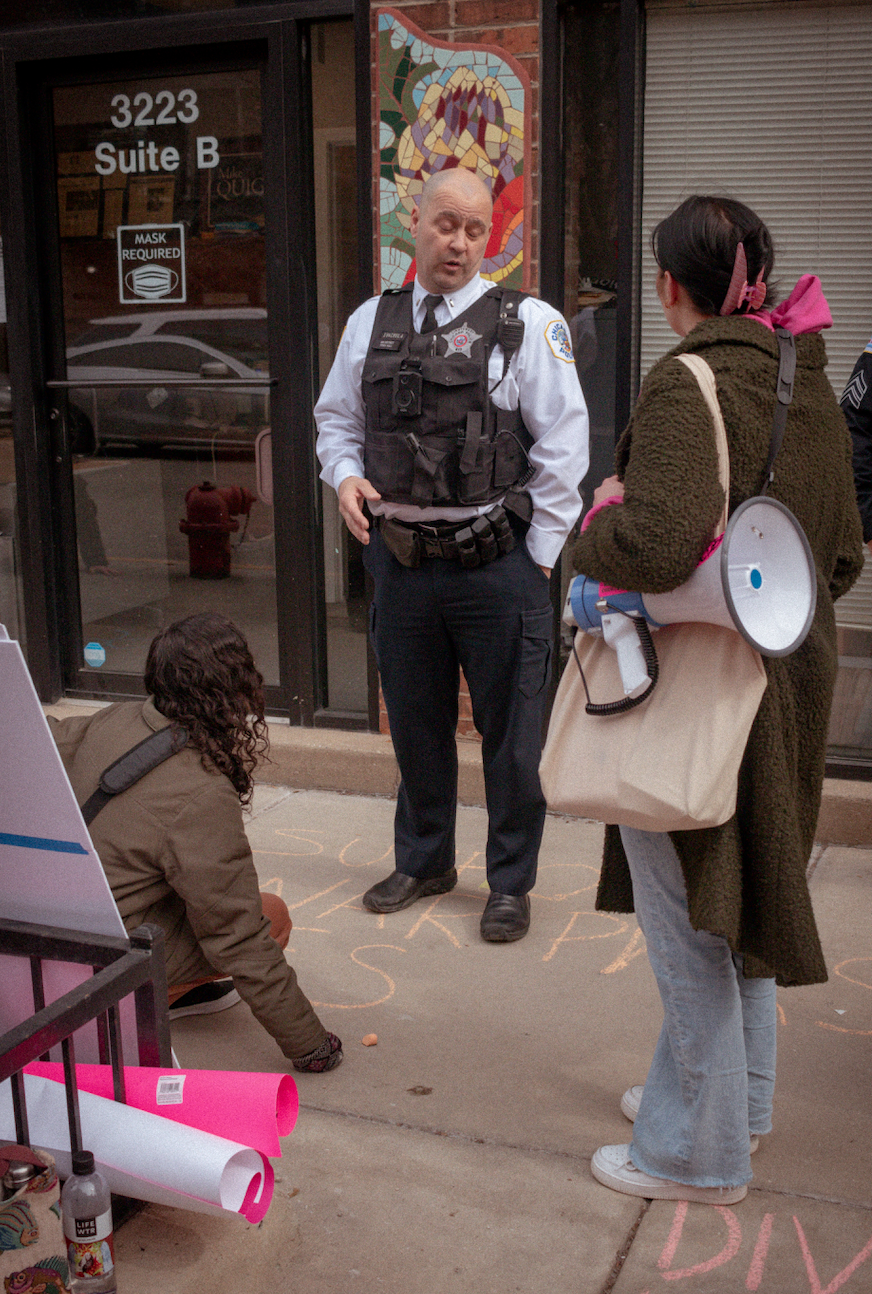 Now our same group, along with a multitude of new DePaul students, have formed a new campaign called “DivestMike” in which we are calling Quigley out about his acceptance of campaign donations from weapons manufacturers, demanding that he sign a pledge saying he will refuse any campaign donations from the top five weapons companies that include Lockheed Martin, Northrop Grumman, Boeing, Raytheon, and General Dynamics. The pledge is spearheaded by CODEPINK, a women-led peace organization. Quigley finds himself in a similar issue as with Medicare for All; he is the only congressperson in Chicago that accepts a substantial amount of campaign funds from weapons companies. We are planning for yet another long stretch of activism aimed at Quigley, expressing concerns that his campaign donors may affect the way that he votes. Jan Schakowsky and Marie Newman, two of Quigley’s Illinois colleagues, have already signed the pledge.

According to the Open Secrets breakdown of his 2020 cycle, Quigley accepted $10,000 from Boeing, $10,000 from General Dynamics, $8,000 from Lockheed Martin, $7,500 from Honeywell, $5,000 from Northrop Grumman, and $3,500 from Raytheon Technologies. This year in 2022, Open Secrets suggests that Quigley has taken significantly less money from weapons manufacturers, however, he still fails to openly refuse all donations from these companies. DePaul students working on the “DivestMike” campaign are serious about stopping the influence of money in politics and are more than willing to work towards this goal for an extensive period of time. 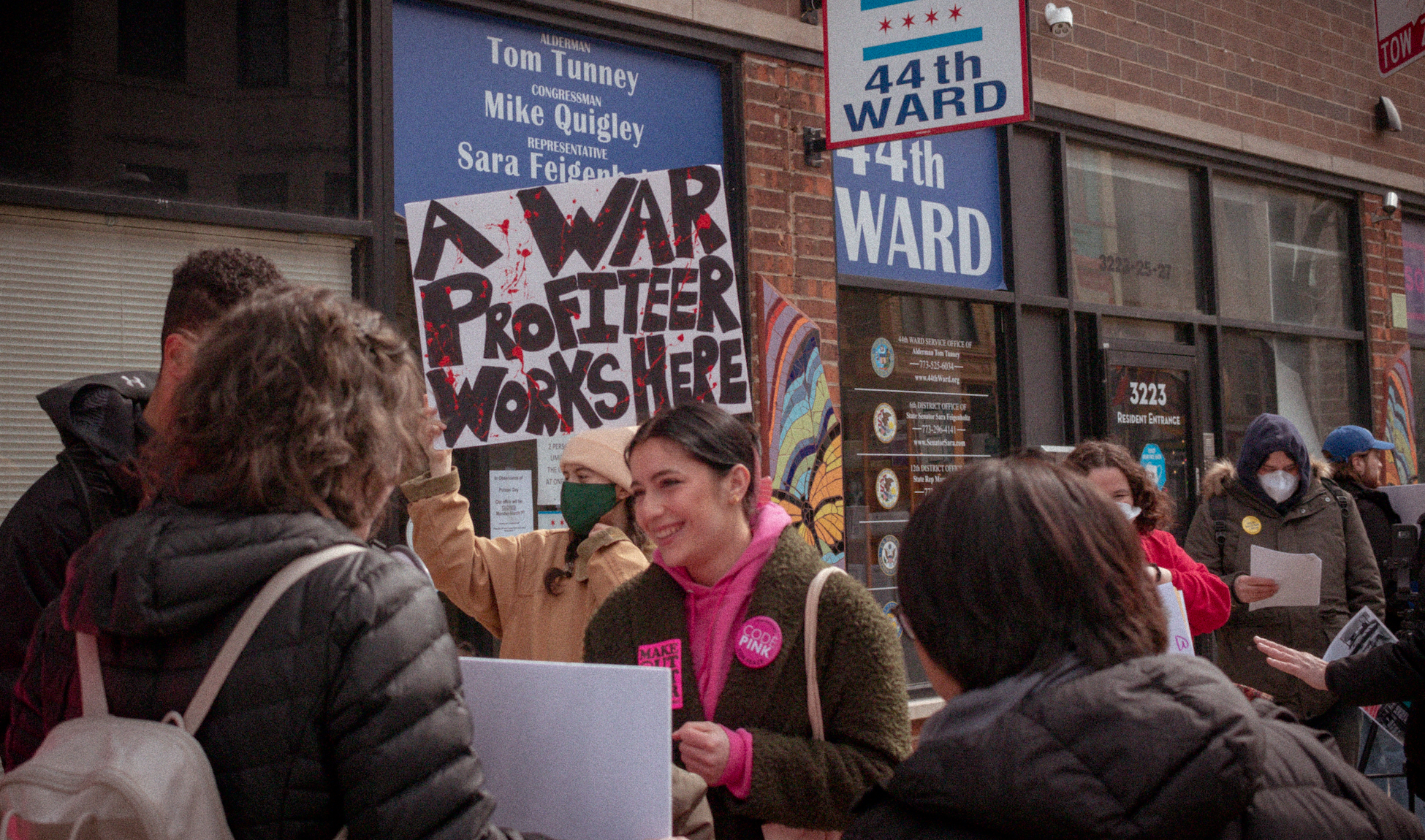 “From the Medicare4Mike campaign, we know what works,” says Rafia Afzal, a junior at DePaul involved in the campaign. “Mike Quigley needs to be more accountable to us. We will continue to call his office, canvas around the district, and when the time comes and he still refuses to sign the pledge, we will be doing sustained protests outside of his office like we did last year.”

Aside from being concerned about the immense influence money has on politics and its effects on democracy, we are also taking issue with the donors themselves, directly associating weapons companies with the conflicts that their weapons fuel. During Israel’s bombing raids on Gaza in the spring of 2021, the U.S. authorized a sale of Boeing weapons to Israel. In late January of this year, a fragment of Raytheon weaponry with their manufacturer code on it was recovered from a Saudi-led coalition airstrike that killed over 90 people at a detention facility in Saada, Yemen which was used to house migrants. Lockheed Martin was also facing scrutiny in 2018 for building the bomb that was used to attack a children’s school bus in Yemen. In fact, “70% of Lockheed Martin’s revenue came from the U.S. government the same year the companies’ bomb was used on the children’s school bus,” says Azfal. These same companies Quigley uses as campaign donors are directly affected by the way Congress chooses to allocate funds. 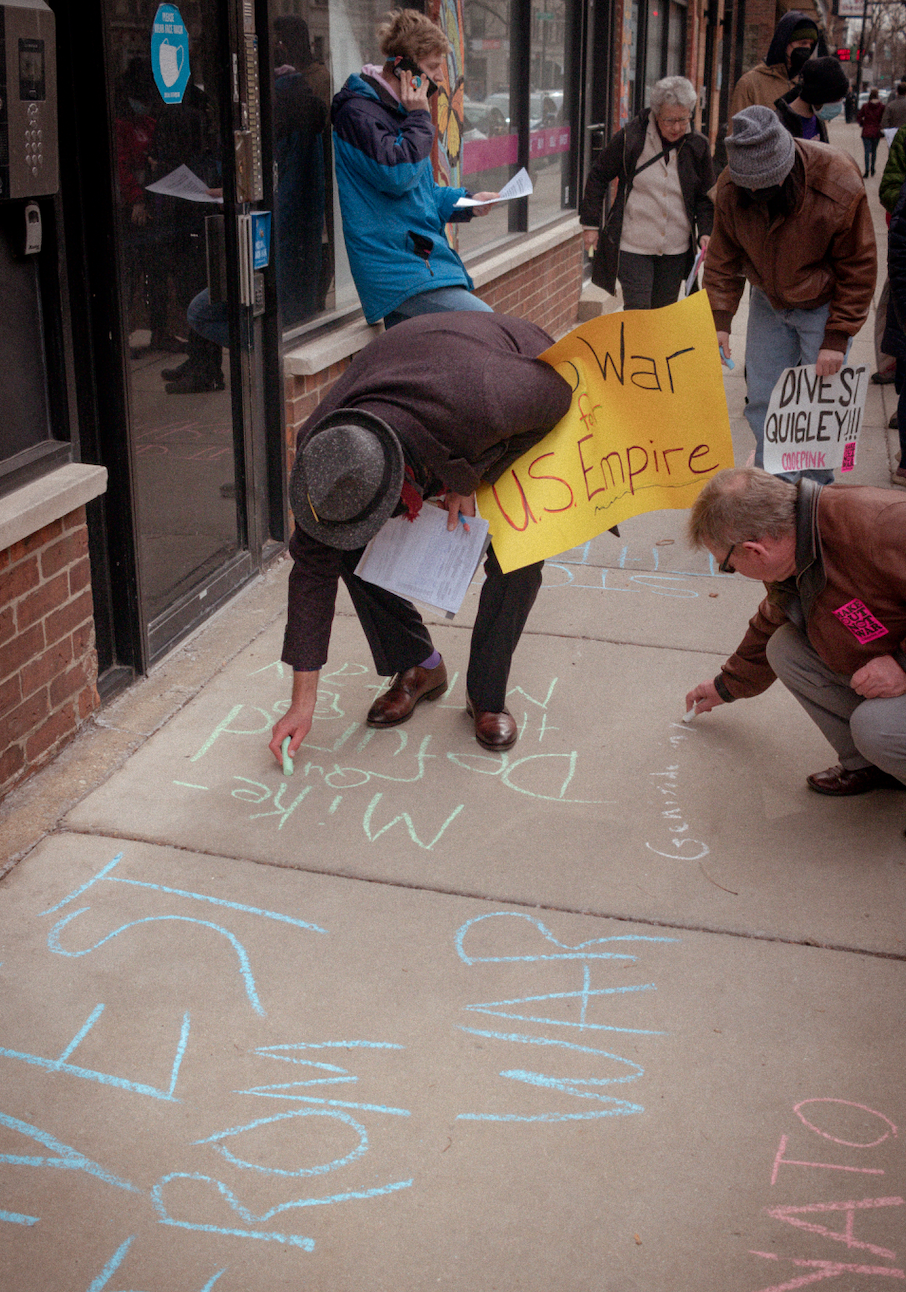 In-person canvassing by us at CAPA DePaul, other students and alumni include flyers about the importance of divestment, signage that says “Divest Quigley,” a cardboard check from weapons companies to Quigley, as well as trash bags in the shape of money bags to represent the money he takes from these companies. Members of the “DivestMike” campaign are also encouraging other constituents in the district to call on Representative Quigley to sign the pledge that ensures his refusal of campaign donations from weapons companies. We cite the issues of money in politics, environmental destruction caused by the weapons made from the companies that donate to Quigley, and the glaring fact that these companies profit off of war, conflict, and violence.