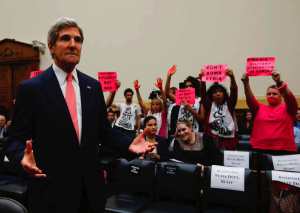 Secretary of State John Kerry’s criticism of the code pink disruption of the Foreign Relations Committee hearing on the threat posed by the Islamic State, or ISIL is that its founders have lost sight of its goal of helping people, because they disagree with the Obama administration policy in fighting ISIL. Code Pink agrees that ISIL is violating human rights of women, but they also feel that airstrikes are violating human rights because they kill more innocent people and do more damage than the so called terrorists, and they create more terrorists.

President Obama believes what the military tells him, as did President Johnson and Nixon, that more bombing and training the South Vietnamese, the Iraqis, now Syrian Rebels will bring peace to the region. That did not work then and it won’t work now. What it did was destroy their administrations, as it is destroying the Obama legacy.

Code Pink feels that President Obama can redeem his administration by realizing that dealing with ISIL is not his responsibility. That responsibility belongs to the UN, and if the Obama administration works with the UN they can change war into police actions and bring peace to the Middle East. That means talking to all UN members, including Iran, not acting like extremists who won’t even talk to people, and stopping the bombing of innocents because they think they are protecting the American people. These actions are not protecting American citizens. They only add to the threat of violence against us and at the same time drains the treasury of funds that are needed to be invested in America as it does for all countries in the region that need to rebuild their war shattered economies. There is plenty of blood on both sides’ hands and a new start is needed not the same old military response and the endless cycle of violence.

The only way to stop ISIL is negotiating with UN members to end the regional conflict, and to supply boots on the ground from counties such as Russia and China to provide security and give humanitarian aid. It will take courage for President Obama to say no to air strikes and yes to the UN.

It is not Code Pink that has lost its way, but America’s foreign policy since Vietnam, that this go it alone imperialistic militarism is somehow helping people, and spreading democracy, it is doing neither. If President Obama can learn from President John Kennedy who said “Let us never negotiate out of fear, but let us never fear to negotiate,” he can change war into police actions and truly help people.