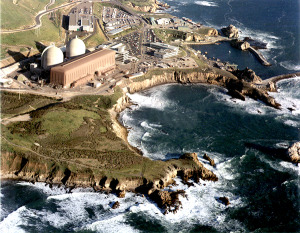 The question that is currently being debated about Diablo Canyon Nuclear Power Plant is: “Is it sufficiently earthquake-proof?” A question that was being asked about Fukushima Nuclear Power plant before March 11, 2001 when a 9.0 earthquake shook Japan it sent a 14 meters (46ft) high tsunami racing towards Fukushima that overwhelmed the plant’s seawall, which was 10 meters high (33ft).

The seawater quickly flooded the diesel generators and the emergency generators, once backup battery power was lost the active cooling systems stopped; the reactors began to heat up, causing a core meltdown, followed by an explosion that released radiation over a 30 Km exposure area, leading to a displacement of approximately 300,000 people. Today 300 tons of radioactive contaminated water per day is leaking into the Pacific Ocean, the radioactive isotope Cesium 134 is spreading around the ocean and is approaching the west coast. To stop the leak an ice wall was built, which consists of 1550 coolant-containing pipes driven 100 feet into the ground, creating a layer of permafrost that in theory will stop water leaks and this giant freezer will require large amounts of energy to run. Unfortunately the ice wall is not working and radioactive water continues to flow into the Pacific Ocean. This radioactivity is adding to that which is already present in the world’s oceans from nuclear testing. The cost of this disaster is in the billions and the meter is still running.

There are many similarities between Fukushima and Diablo Canyon. Diablo Canyon was built to withstand an earthquake of 7.5 magnitude as was Fukushima, there were questions and warning about Fukushima design and safety as there are about Diablo Canyon and a sense of false security in a mistaken belief that it is safe and technology can save us. It wasn’t the earthquake that destroyed Fukushima but the 14 meter tsunami wave that was higher than the seawall designed to withstand a wave 6.1 meters high. Diablo Canyon sits 85 feet about sea level and has a 30 foot seawall. San Onofre Nuclear power plant, located in San Diego County, seawall sits approximately at the same elevation as Fukushima. San Onofre was shut down permanently in 2013 following the failure of replaced stream generators that cost $671 million. San Onofre stores onsite hundreds of tons of highly radioactive “hot” spent fuel-rods, in cooling ponds. The decommissioning is expected to cost $4.4 billion dollars and take 20 years and the spent fuel are to be held on-site in dry casks indefinitely, because there is no place in the country to dispose of this highly toxic material.

The similarities are a warning, that it is time to shut down Diablo Canyon, not just because a 9.0 earthquake can happen, with the possibility of releasing more radioactivity into the ocean, air and surrounding countryside. But the long term closing cost to rate payers of toxic nuclear waste, the life threatening health effects for humans, the environment and there is no energy being produced for all that money. That $671 million could haveput solar panels on 15-20,000 homes in San Diego County. Many other green energy projects could have been funded with that $4.4 billion, instead the money is being thrown down the nuclear rat hole. It will also be a lot quicker, cheaper, easier and safer, to rebuild with green energy, than nuclear in the case of a large natural disaster.

All these costs added together do not justify the risk to get power from nuclear energy when it can be replace it with green energy cheaper and without the toxic side effects. California cannot afford a Fukushima, or a Diablo Canyon, it is not part of our green energy future. By shutting Diablo Canyon down now, it will not only save rate payers money, it will be saving them from a nuclear meltdown.