by Toby Blomé
Friday, November 11, 2021,
British Embassy, San Francisco
It was a very sad morning for so many of us around the world yesterday, as we awoke to the horrendous news that a British high court overturned an earlier court ruling, and increased the possibility for the extradition of journalist and Wikileaks publisher Julian Assange to the U.S. This court ruling will be appealed by Julian’s legal team, and there are also other aspects of the case that still need to be ruled on, however, for those of us who hold Julian Assange dear to our hearts, as a brother who risked and sacrificed so much for all of us by exposing the injustices and war crimes of the U.S., we were heart-struck.
In just a matter of a few hours we managed to put together an “impromptu action” at 3pm outside the British Embassy in San FrancIsco yesterday, with a banner, a couple of signs, and seven Assange supporters.  We stood for over an hour outside the embassy, periodically expressing our outrage and declaring our demands through a megaphone:  “NO EXTRADITION”  “FREE JULIAN ASSANGE”  “DEFEND FREE PRESS & DEMOCRACY,” “SHAME ON BRITAIN AND THE U.S.” etc. 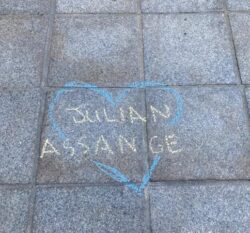 Thank you Adrienne Fong for bringing chalk and leaving behind an expression of our intentions and demands on the sidewalk, including:  “FREE JULIAN ASSANGE.”   (See attached photos)

We were pleased with the overwhelming support we received from many of the passersby.  Half a block away, one bicyclist shouted out “FREE JULIAN,” as he whizzed by.  At the end of our rally, we attempted to go inside the building to the lobby, to see if someone would convey our demands to UK Embassy officials located up on a “secure” floor.  We were confident that we represented thousands of people around the world, likely millions, who stand with Julian. But the security guard locked the glass doors as we approached, so we couldn’t enter the lobby.  A short while later, however, another relatively friendly security guard came outside and reported that he had already let the embassy staff know that we were there, and what we were there for. When asked what he reported to them, he was able to verbalize our key demands/purposes.  (Probably from hearing them expressed thru the megaphone earlier.) We all felt that our effort and time was well spent!

Huge thanks to Diana, Fred, Bob, Adrienne, Lindsay and Ms.Perkin (a new friend from Walnut Creek) who made themselves available on such short notice.  WE THE PEOPLE DEMAND JUSTICE FOR JULIAN!
Watch Democracy Now’s report from yesterday to hear the latest on Julian Assange.
Executed by Bay Area CODEPINK and supporters! 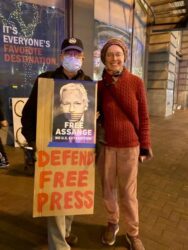