The US is losing the War. 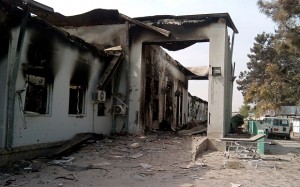 “I feel very angry, but I don’t want anything from the U.S. military,” said Khalid Ahmad, a 20 year old pharmacist who survived the U.S. bombing of the Médecins Sans Frontières (MSF) / Doctors Without Borders Hospital in Kunduz on the 3rd of October, “God will hold them accountable.”  Khaild is recuperating at Emergency Hospital in Kabul from a U.S. shrapnel injury to his spine that nearly killed him. This why the US is losing the war, they turning the very people they are trying to help against them.

Khalid’s story and The Taliban retaking Kunduz in microcosm is evidence that the current  US policy of airstrikes, drone attacks and complete disregard of civilian deaths and causality across the Middle East is losing is the war. In fact the war  is already lost, it is only a matter time before the US realizes it. The fall of the city was a major stumbling block for Afghan security forces which have had difficulty keeping insurgent fighters at bay since the U.S. draw down and NATO took on more of a active role there last year. It is clear that without US troops and air support the Taliban will overrun the country.

Kunduz has been seen as a well-coordinated, multi-pronged attack from Taliban fighters who converged from different directions, stunning Afghan security forces. The Taliban held control of the city for three days before being pushed back. During that time the Taliban Fighters “seized military equipment, APCs, launchers, tons of heavy and light arms ammunition as well as archived documents from the ministry of national directorate services and other organs” and proved they could achieve their objectives in “every part of the country” despite the continued presence of foreign forces, a Taliban statement said. Not only can the Taliban move at will the US is rearming them, it is only a matter of time, after they regroup, until a new attack will be launched.  The Taliban are using the same tactics used by the North Vietnamese with great effectiveness against the US during the Vietnam War. US response to the Taliban attack was massive airstrikes, as it was in Vietnam with little affect, and it dose not matter that  hospitals  are destroyed.

“I was sleeping when the bombing began at about 2 a.m. I went to see what was happening, and to my horror, I saw that the ICU was on fire, the flames appearing to shoot 10 meters up into the night sky. Some patients were burning in their beds.”

“With two other colleagues, I rushed to the guard house, which was about five metres from the hospital’s main gate. In the guard house were four security guards. We all decided to make a run for the hospital gate, to escape the bombing.

“I took off and just as I reached the gate, with one foot outside the gate and one foot inside the hospital compound, a shrapnel hit me on my back.”

“I was bleeding quickly from my back, the blood pooling at my sides. Feeling that my end was near, I was desperate to call my family. My colleagues and I had taken out the batteries from our cell phones because the U.S. military has a way of tracking and target-killing people by picking up their cell phone signals. With one good arm, somehow, I pulled out my phone and inserted its battery.”

“The Taliban had already taken control of all areas  in Kunduz except the MSF Hospital and the airport. I felt I could still serve the patients safely because neither the Afghan /U.S. military forces nor the Taliban would bother us. At least, they’re not supposed to.”

Not only are the people in fear for their lives because they carry cell phones, the US has betrayed their trust and disgraced the values that she expounds: the dignity of the person the sanctity of democracy of equal rights and human rights.

The hospital had been treating hundreds of people wounded by shrapnel and gunfire during the intense fighting, before it was blown to pieces, in an attack that lasted over an hour. The US military had describe the attack as accidental. MSF has repeatedly demanded an independent international investigation of the Kunduz bombing under the Geneva convention, but the U.S. has so far refused to consent, because they are telling a lie, they know it was no accident, it is policy.  Their justification for civilian casualties as “collateral damage” is that the ends justifies the means, in which the greater good –a successful outcome of war or defeat of the enemy. The problem with this theory it is not winning the war it is losing it and US military is in denial and don’t want to admit the failure of bombing to bring peace. So they blindly keep on bombing.

While Kunduz is perhaps higher profile, on 2nd December, Khalid’s haunting story repeated itself in Taiz, Yemen, where an MSF clinic was attacked by the US backed Saudi coalition forces. MSF  had one of their hospital bombed in Yemen. In fact, the International Committee of the Red Cross reported in November of 2015 that nearly 100 hospitals throughout Yemen were attacked since March 2015.

The bombing of civilian infrastructure extends beyond clinics. Since the US  military campaign began  in Iraq, in 2003  it has spread to Afghanistan, Pakistan, Libya Yemen, Syria the US led  coalition has bombed medical facilities, markets, homes, schools, power plants, bridges, refugee camps, factories, and warehouses storing humanitarian supplies. Not only has the bombing destroyed towns and cities, it has let loose the chaos of civil war, ethnic cleansing, and has created millions of refugees that are wandering the world looking for a home.  And the US doesn’t want to let any in.

A recent report by Action On Armed Violence and the United Nations Office for the Coordination of Humanitarian Affairs finds that, in 2015, 93 percent of people killed or wounded in populated areas as a result of “air-launched explosive weapons” were civilians and were also responsible for almost two-thirds of damaged or destroyed civilian public buildings.”

Despite mounting evidence of atrocities, the US got the UN to abandon a probe of human rights violation that the US and their coalition partner Saudi Arabia are committing war crimes, because they are and don’t want to the face the truth.

“I must have passed out, as my next memory was of hearing my cousin’s voice and other voices, and being taken to the kitchen of the hospital where some basic first aid was being given to many injured persons.”

“My cousin brought me to a hospital in Baghlan Province which had unfortunately been abandoned because of fighting in the area. So, I was taken to Pul-e-Khumri, there was no available help in Pul-e-Khumri too, so I was finally brought to this hospital in Kabul. I’ve had five surgical operations so far,” Khalid said, his voice fading off a little, “and I needed two litres of blood in all.” How many civilians like Khalid hurt, or had family members injured by the US military can find help to treat their wounds, especially if the US is bombing all the hospitals

“I’m angry. The U.S. military is killing us just because they want to be the Empire of the world.”

There are hundred of thousand of more Khalid stories spread across the countries the US is devastating that believe now as Khalid believes, that the US is an evil empire trying to take over the world. It is also creating militants of young men seeking revenge against the US, for loved ones killed and for their towns and villages that have been destroyed. The current US policy has lost the war and more bombing will not change that fact.

The only way to win the war, and change the hearts and minds of all the Khalids around the world, is to admit the failure of its current policy and to switch from the offence to defense, from blowing up hospitals to building hospitals, from causing wounds to treating wounds them, from destroying towns and village to rebuilding them.  The US also has to get the UN and all nations involved in trying to bring peace, in the rebuilding of the Middle East and providing security that protects all people’s human rights including women’s rights. Until the US takes these steps the violence will escalate with more attacks on the US and Europe that leads to greater bombing, the endless cycle of violence, with growing anti-American sentiment, until the bankruptcy of the US policy finally reveals itself and will force the US to withdraw in total defeat. As it did in Vietnam.

Khalid’s story (excerpted above)was told to Dr.Hakim, ( Dr. Teck Young, Wee ) is a medical doctor from Singapore who has done humanitarian and social enterprise work in Afghanistan for the past 10 years, including being a mentor to the Afghan Peace Volunteers, an inter-ethnic group of young Afghans dedicated to building non-violent alternative to war. He is the 2012 recipient of the International Pfeffer Peace Prize.