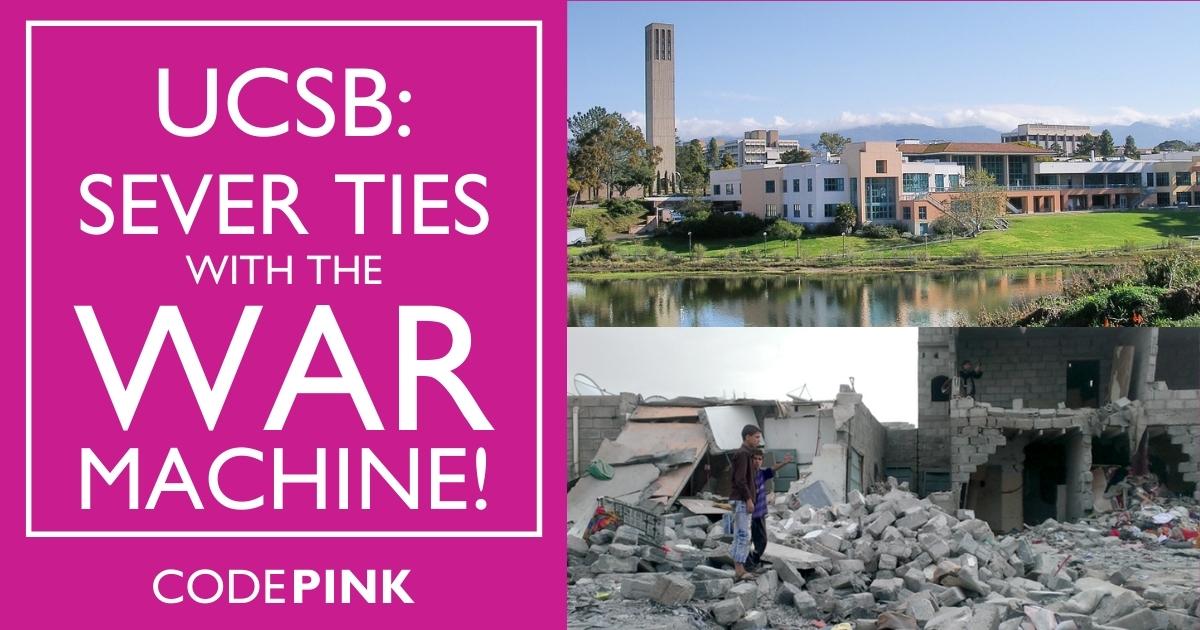 Once the local epicenter of draft resistance and anti-Vietnam war protests, the University of California at Santa Barbara (UCSB) now increasingly partners with the Pentagon, the world’s largest institutional emitter of greenhouse gasses. Academics research the production of soldiers who can survive on fewer calories and fighter jets that can escape detection. The administration boldly promotes for-profit weapons contractors on the university website. UCSB even co-sponsors local K-12 Department of Defense science programs to groom students for war and surveillance jobs upon graduation from high school.

Amid the towering Eucalyptus and the beautiful lagoon that frame UCSB’s Nobel Prize-winning campus, visionary social science professors plan conferences on climate justice, while others with doctorate degrees in engineering, chemistry, math, psychology, biology and computer science oversee teams of graduate students laboring for the Pentagon and its private military contractors who profit from an escalating arms race.

Yes, distinguished professors are collaborating with the U.S. Army to prepare for doomsday wars with Russia and China as the Pentagon rushes weapons to Ukraine and sends nuclear-powered submarines into the South China Sea.

Working on projects funded by the Department of Defense and its for-profit weapons manufacturers, university academics boost the bottom line for shareholders and executives cashing in on a near trillion dollar military budget, half of which fills the coffers of private contractors. In 2020, CEO’s at Raytheon Technologies and Northrop Grumman, two UCSB war contractors, made over $20 million each. Meanwhile, the average California college student graduated thousands of dollars in debt. Houseless UCSB students slept in their vans or dropped out of college for lack of housing.

In an outrageous example of the university’s incestuous relationship with the military industrial complex, a UCSB web portal reads, “UCSB’s Technical Staff and Facilities Allows Raytheon’s Vision Systems to do Technology Development at a Fraction of the Cost.” Another portal, this one for Raytheon recruitment, promotes a “Raytheon Info Session” for “all majors, undergraduate and graduate students alike.”

According to UCSB’s Campus Counsel office, from 2016 to the present, UCSB signed 398 research-oriented contracts with military contractors and the Department of Defense. Several months after this writer submitted a Public Records Act (PRA) request to read the contracts, the university has yet to release one page.

While university compliance with a Public Records Act request can drag on for years — absent massive and sustained student protests or a lawsuit to compel compliance — a weekend search of the Internet reveals the UCSB partnerships listed below:

(1) Institute for Collaborative Biotechnologies (ICB),funded by the Department of Defense, to develop technology for robotic soldiers, radar-absorbent missiles, 3-D printed bomber parts, drones and “chemical amplification” to improve soldiers’ vision and hearing for the future battlefield.

3) Raytheon Vision Systems to develop micro-electronics and infrared sensors for missile and space surveillance systems. According to Amnesty International, Raytheon supplies Saudi Arabia and the United Arab Emirates with laser-guided bombs for a war on Yemen that has killed 233,000 people and left the country on the brink of starvation.

4)  Northrop Grumman to develop Air Strike, “a desktop mechanical shock test apparatus capable of delivering controlled, repeatable, mechanical shocks.” Northrop Grumman, which considers UCSB one of its “top tier” schools for research, manufacturers the B-52 stealth bomber and the F-35 fighter jet, and was awarded a sole-source contract to develop new nuclear missiles.

(5) Department of Defense’s Bioindustrial Manufacturing and Design Ecosystem (BioMade) to “maintain military dominance. Biomade’s website links to a project to prepare for future wars in which U.S. aircraft land in the middle of nowhere, outside of one of the U.S.’s 750 overseas bases, on runaways grown with a mixture of sand and bacteria.

These collaborations come at a cost–establishment of a pipeline into carbon-intensive military and surveillance industries to further exacerbate the climate crisis; erosion of the “public” in public universities to facilitate increased corporate influence over research and curriculum; acceptance of the institution of war and complicity in its attendant death and destruction.

This writer emailed Chancellor Yang, as well as several professors involved in UCSB’S Pentagon-related research, soliciting their thoughts on university complicity with war planners and weapons profiteers. Neither the Chancellor nor the professors responded.

Critics of the petition might argue the United States needs a strong military, so what’s the problem? The problem is we are escalating the arms race and plowing more federal dollars into a death economy when we need to unify the world in the face of climate catastrophe

We already have enough weapons to destroy the world ten times. Our military budget is larger than the next several countries combined. The U.S. empire with 750 overseas bases uproots indigenous populations and contaminates land and water. In sending nuclear warships into the South China Sea and expanding NATO into Eastern Europe, we risk a nuclear confrontation that would eviscerate soldiers and civilians, then shroud this continent in a sub-freezing nuclear winter.

Other skeptics might say, “UCSB cannot afford to lose the money funding these military research programs.” First, the facts. UCSB’s 2019 fiscal budget was nearly a billion dollars, with $300 million dollars allotted for research the following year. According to the university,  the Department of Defense funded $33.6 million in research grants. How much Raytheon, Northrop Grumman and other military contractors supplied is a mystery and may be tucked in the “other” category that includes another $68.8 million. What would happen if UCSB lost $33-$100 million as a result of forgoing military-related research? The university would not work on advanced missile systems or soldier preparation for the future battlefield; instead the university might pursue more grants from the National Institutes of Health, which last year supplied $27.8 million in research funding.

What is to be done?

The Associated Student Senate, together with the faculty’s Academic Senate, could pass a resolution calling for a prohibition on UCSB weapons research and expulsion of military contractors, then deliver that resolution to the Chancellor, the press and our congressman Salud Carbajal, a member of the influential House Armed Services Committee, who obtains military-related contracts for UCSB and accepts campaign contributions from Raytheon, Lockheed Martin, General Dynamics and other military contractors.

On the heels of UC’s graduate students’ successful union organizing drive, students in the College of Engineering could in the future withhold their labor from the university’s military research projects. They could refuse to design new weapons systems for the architects of human misery. They could press administrators and professors to reject partnerships with war profiteers and seek more non-military grants from other federal agencies.

We are as powerful as the reaches of our imagination, so let’s organize and mobilize to demand UCSB sever ties with the war machine to invest, instead, in peace and climate sustainability.

A resident of Santa Barbara, Marcy Winograd graduated with a political science degree from UC Berkeley and a teaching credential from UCLA. She is a member of Democratic Socialists of America-Santa Barbara and Coordinator of CODEPINK Congress, a campaign for demilitarization and a progressive foreign policy. In 2020, she served as one of Santa Barbara’s DNC delegates for Presidential candidate Bernie Sanders.