Creech to Ramstein a Network of Killer Drone Bases. 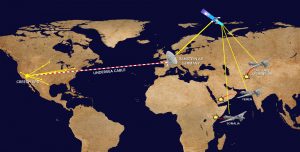 Creech Air Force Base in Nevada is the brain of a worldwide network of killer drone bases. The pilots at Creech and other ground control stations send their commands to the drones they operate via trans-atlantic fiber optic cables to Germany, where the US AFB Ramstein uplink  bounces the signal to a satellite that connects to drones over Afghanistan — which has been on the receiving end of more drone strikes than any country in the world, Pakistan, where the CIA has conducted a covert air war for the last decade, Yemen, Somalia and other target countries. The agency’s campaign has killed thousands of people, including hundreds of civilians. Some drone missions are operated from other locations, such as Fort Gordon in Georgia and Cannon Air Force Base in Clovis, New Mexico.

RAMSTEIN  is one of the largest U.S. military bases outside the United States, hosting more than 16,000 military and civilian personnel. The relay center at Ramstein, which was completed in late 2013, sits in the middle of a massive forest and is adjacent to a baseball diamond used by students at the Ramstein American High School. The large compound, made of reinforced concrete and masonry walls and enclosed in a horseshoe of trees, has a sloped metal roof. Inside this building, air force squadrons can coordinate the signals necessary for a variety of drone surveillance and strike missions. On two sides of the building are six massive golf ball-like fixtures known as satellite relay pads.

Ramstein is ideally situated as a satellite relay station to minimize the lag time between the commands of the pilots and their reception by the aircraft, called latency. Too much latency — which would be caused by additional satellite relays — would make swift maneuvers impossible. Video images from a drone could not be delivered to the U.S. in near real time. Without the speed and precise control an installation like Ramstein allows, pilots would practically be flying blind. Ramstein’s satellite uplink station is used to route communications between the pilots and aircraft deployed in a variety of countries which facilitates direct control of the drone wherever it is operating. Video from the drones is routed back through Ramstein and then relayed to a variety of U.S. intelligence and military facilities around the U.S. and the globe. 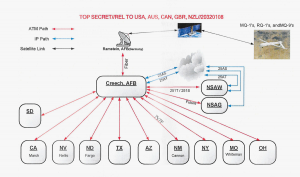 The location, combined with the ability to securely house the large quantities of equipment, buildings and personnel necessary to operate the satellite uplink has made Ramstein one of the most valuable sites available to the U.S. for the operation of its drone. wars. Ramstien location allows it to serve a critical function as Creech’s eyes and ears in the drone war.

Since the story of Ramstien crucial role in the US drone wars was reported by the German news magazine Der Spiegel protests have been staged at Ramstien against the US military presence in Germany, voicing opposition to Washington’s use of killer drones around the world. The protests at Ramstien are part of German anti-drone activists/citizens efforts to keep weaponized drones out of Europe. The German Drone Campaign was founded early in March 2013, to oppose the German government’s plans “to use drone technology for purposes of combat, surveillance and oppression.” Anti-drone movements, though long active in the US and UK, are only just starting up on the European Continent but may have the potential to take off rapidly. Just as killer drones are spreading around the world so are anti-drone movements. Killer drones are not making the world safer they just lead to another round of violence in the cycle of violence. Anti-drone movements around the world are beginning to work together to end the cycle of violence among nations and are trying to make the world safer with non-violent cooperation among nations.