Full Report Back:  People continuing to risk arrest for peace! —By Flora Rogers

Occupy Beale Anti-drone Activists Order Airmen to “Disperse Immediately” and Cease in their Complicity in Trespassing against the Human Rights of People Living Under U.S. Drones.  Six “Peace Patrol” activists were later detained while attempting a citizens arrest of the commander of the base, Col. Larry Broadwell, for his high level role in crimes against humanity committed daily at Beale AFB.  Beale is home to the Global Hawk Drone, which plays a critical role in the unlawful surveillance and ultimate targeting of individuals in the U.S. drone assassination program.  “Occupy Beale AFB” invites other anti-militarism groups around the world to create their own International Peace Patrol contingents, in a global effort to demilitarize our mother earth! (Copycat behavior encouraged) .
[youtube]https://youtu.be/8lYfNfUEfi8[/youtube]
Monday afternoon Aug. 15 the majority of the group met and gathered outside the Wheatland gate of Beale AFB for our monthly Peace vigil. We were happy to have Chris Knudson join up from San Luis Obispo VFP. He along with other regulars to our vigils had come directly from last weekend’s VFP Convention in Berkeley. Much around that event was discussed during our vigil. During the afternoon vigil a group of four from the Bay Area occupied the Doolittle gate. This has been standard in recent years for us to occupy more than one gate during our afternoon vigils.
The afternoon vigil was relatively calm and uneventful. It was hot and we were happy that Shirley brought her pop-up. Jeffrey Gottesman brought his banjo. Marcus, Catholic Worker from Calaveras Co., showed up with wife Chelsea. It was serendipitous to see them come, shining Souls on deck! Marcus did a parody on the mic of an old Dead Kennedy’s song but he changed the words from, “kill the poor” to “smash the borders,” which was delightful. I pointed out the Pave Paws early-warning radar facility (recently upgraded for participation in the Pentagon’s “missile defense” program).
A new face we haven’t seen before was Nancy from Chico. She had been looking online for Peace vigils to attend, showed-up, and jumped right in. She even stayed for our potluck which was also delightful. Highlights from the VFP Conference were shared. We talked about political strategies for making change. We talked about the advantages to holding vigils and working to build on the work we have been doing all these years. 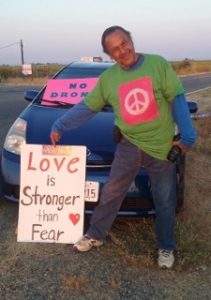 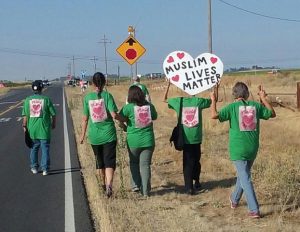 Tuesday Morning, we returned to the Wheatland gate and held our vigils wearing some t-shirts with signage that Shirley made. She has about 30 comfortable green cotton t-shirts with “Peace Patrol” labeled on the back. What a sight it would be to see all those t-shirts in use at the same time!
At about 6:45 AM, we all approached what is disputably the white base boundary line. Toby Blomé, Michael Kerr, Barry Binks, Fred Bialy, Shirley Osgood, Pamela Osgood and myself, Flora Rogers, used a bull horn to read out a written indictment for war crimes.
The statement read as follows:
Personnel at Beale AFB,
As global citizens, we are part of the International Peace Patrol. Beale AFB, through its participation in the U.S. Drone Assassination Program, is in direct violation of the United Nations Declaration of Human Rights, Articles 3, 7 and 10. As an active member of the United States Air Force, your duties indirectly support the illegal activities that take place on this base. Therefore, you are complicit in the crimes against humanity being committed here.
As global citizens, we order you to disperse immediately and to stop helping the illegal drone program to continue. If you fail to comply with the order to disperse, you will be trespassing against the human rights of the people of Afghanistan, Iraq, Syria, Yemen, Pakistan, Libya and Somalia, who are victimized by U. S. drones. Therefore, as a global citizen, I order you again to disperse immediately.
Since you have all failed to disperse, we are compelled to make a citizen’s arrest of the commander in charge of Beale AFB. As the top of the chain of command, Col. Broadwell has the highest responsibility to guarantee that all International Laws are being upheld. We call on all personnel at Beale to either stand down or to assist us, so that we can make this critical citizen’s arrest to protect the global community.
Toby spoke to the millions of refugees who have been displaced from their homes, many drowning at sea, all victims of perpetual warfare. Shirley spoke some about those who are targeted and murdered by drone strikes being just like us and our friends and families. Barry Binks told the story of a German soldier who is now 95 years old, Oskar Gröning. He is a man who, upon hearing Neo-Nazi claims that the holocaust never happened, told the truth about what he saw while stationed at Auschwitz. Despite his advanced age and outspoken coming clean by telling the truth about this self-described “small cog in the machine” was prosecuted in a German court for the part he played. Binks warned that participation in extrajudicial drone strike killing, even just assisting or standing by watching, without interceding, we are culpable for these crimes. Pamela spoke about her deceased father, a career military person himself, and how he would not approve of the unlawful activity taking place on the base.
After we all had had a chance to speak out, Toby, Michael, Fred, Shirley, Pamela and I crossed over the base line holding hands. A few of us inquired “Which way to find the base commander?” as we were there to perform a citizen’s arrest of Col. Broadwell for the crimes being committed at Beale AFB against humanity. We were all detained, handcuffed, subjected to a weapons search and then loaded onto a bus for transport to a processing center. After years of arrests for nonviolent civil disobedience actions at the base, the security service is getting quite efficient at completing the paperwork. Within an hour we were transported back to the base boundary and released to be reunited with Beverly, Barry, and Nancy, who were there to support our efforts.
Once we were released from being detained we greeted our remaining support, said good-bye to the Base personnel, embraced each other and started down the road. We had had some warm welcomes from some of the people driving in and out this week as we often do. As we left, one woman entering the base politely tooted her horn, slowed way down, and blew to us several very generous and appreciative kisses. It was another sweet surprise, inspiring us to continue doing this very important work.
Watch for future announcements for our upcoming vigils and events. And please come join our vigils here in Northern California when the Spirit moves you. In the meantime, as was my own addition to our order for the military to disperse immediately, “Practice daily doing something subversive against an Empire of Tyranny and Oppression.”
Join CODEPINK, VFP and other N. Calif. activists at Beale soon:
www.facebook.com/OccupyBealeAirForceBase