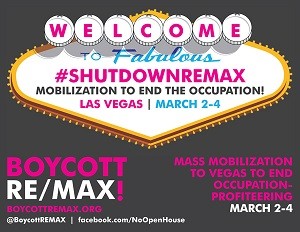 As part of the Boycott, Sanctions and Divestment movement against the Israeli Occupation,  Boycott RE/MAX: No Open House on Stolen Land campaign is having a national mobilization to the  RE/MAX R4 Convention March 2-4, 2015 at the Mandalay Bay Resort, Las Vegas  to protest RE/MAX’s selling of stolen Palestinian land in the West Bank. The mobilization will target the RE/MAX R4 Convention.

This is the largest gathering of RE/MAX representatives with over 6,000 in attendance from more than 60 countries around the world. Which includes speakers like top RE/Max executives, Peyton Manning, and even a performance by Aerosmith frontman Steven Tyler.

We have petitioned Aerosmith frontman Steven Tyler to not play the convention.

JOIN US!: Register to #ShutDownREMAX Convention in Nevada, March 2-4th!
We are staging three days of action against RE/MAX occupat 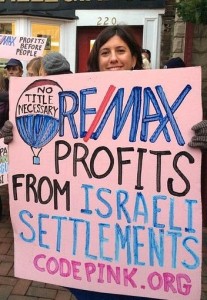 ion profiteering. These exciting three days of action that will include direct action on the Vegas Strip, vigils, workshops and community-building spaces on BDS, Palestine solidarity, and ending US complicity in the Israeli Occupation. RE/MAX is directly and knowingly profiting off of settler-colonialism and we are going to #ShutDown settlement sales! We need YOU in Nevada!

–Travel caravans are being organized from the Bay Area and Los Angeles in California with a limited number of accommodations available on a first come, first serve basis.

–If you are a student, we are available to write to participants’ institutions to allow for time off.
Contact: Sophia Armen,  NoOpenHouse@codepink.org , 818-827-4320
Learn more about the Boycott Re/MAX campaign:  www.boycottremax.org

While RE/MAX parties on the Vegas Strip, Palestinian homes are bulldozed to make way for Israeli settlements. Denver-based real estate corporation RE/MAX  is profiting through RE/MAX Israel , from a office in the settlement of Ma’ale Adumim  that sells lavish homes and apartment to Jewish-only settlers in the West Bank on stolen Palestinian land.  RE/MAX International is profiting off of the selling of illegal Israeli settlements in violation of international law. 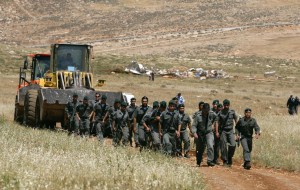 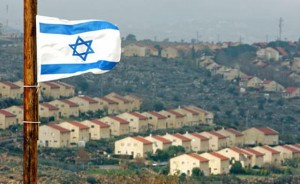 P.S. The next day, many activists will join the #ShutDownCreech actions to stop drones at Creech Air Force base in Indian Springs! Be part of this exciting Week of action to #ShutItDown in Nevada Against Militarism and Occupation: #ShutDownREMAX and #ShutDownCreech!