Cities say no to $54 Billion for War

CODEPINK SF Bay Area invites everyone to join CODEPINK’s campaign to say no to Trump proposed $54 Billion increase in military spending. Our goal is to encourage people to tell their elected representatives to divest from a war economy and to invest in a peace economy. Thanks to the work of many of our local CODEPINK communities we had a tremendous victory at the U.S. Conference of Mayors! The Conference, representing 253 attending mayors from big cities like New York and Los Angeles to small rural townships, unanimously passed a resolution opposing Trump’s call for an additional $54 billion to the Pentagon budget. Instead of slashing anti-poverty and environmental programs to increase war spending, the mayors urged Congress and the President to move funding in the opposite direction, out of the military and into human and environmental needs.

The say no to $54 Billion campaign was launched on April 4th, 50 years after Martin Luther King Jr.’s call to end militarism and war, by a coalition of leaders in the anti-war, civil rights, immigration, women’s and interfaith movements.

Our environmental and human needs are desperate and urgent.  Military and climate wars are destroying lives and environments, threatening the planet and creating enormous flows of desperate refugees. We need to transform our economy, our politics, our policies and our priorities to reflect that reality. That means reversing the flow of our tax dollars, away from war and militarism, and towards funding human and environmental needs, and demanding support for that reversal from all our political leaders at the local, state and national levels.

President Trump plans to strip $54 billion from human and environmental spending so as to increase already massive spending on the military. The plan raises Pentagon spending to well over 60 cents of every discretionary dollar in the U.S. budget — even as Trump himself admits that enormous military spending has left the Middle East “far worse than it was 16, 17 years ago.” The wars have not made any of us safer.

President Trump’s policy is taking money from domestic spending to  increase spending on something that is not working in making the world a safer place or a greener planet. In order to make the earth safer and greener, we need to change from militarism to diplomacy,  from a War Economy to a Peace Economy. 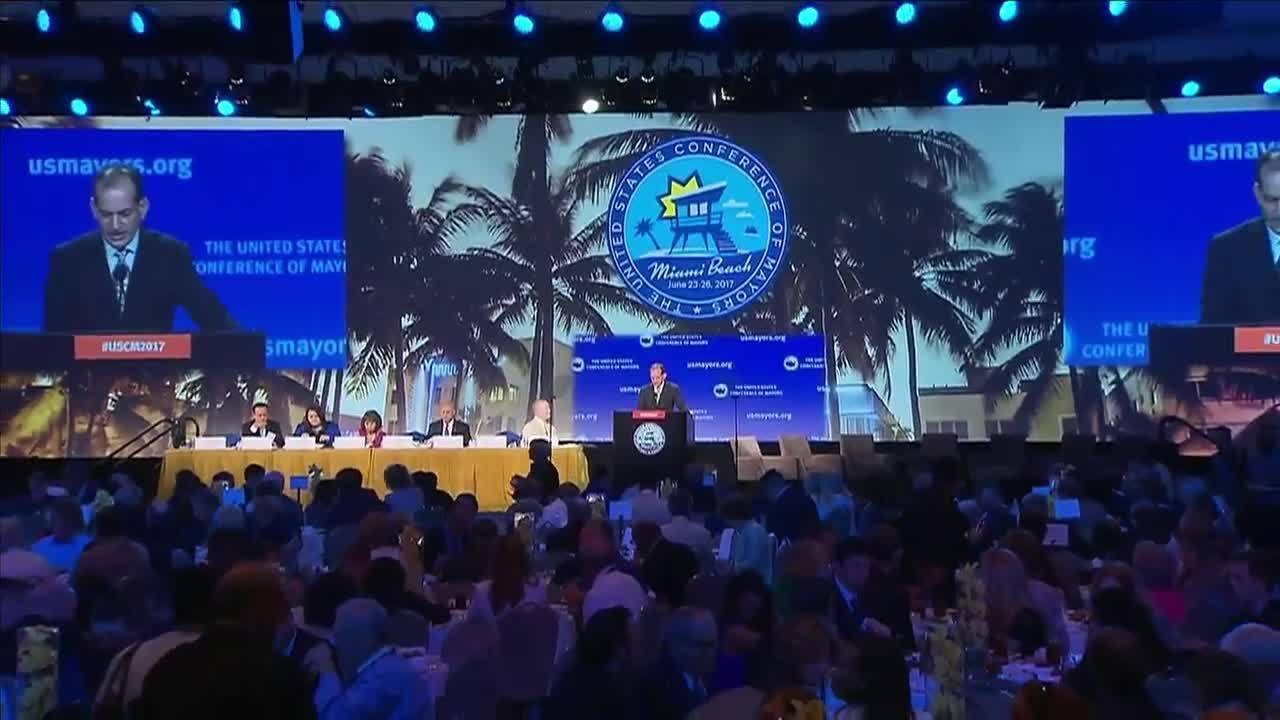 The current United States policy is failing to bring peace and the cost of war is preventing many cities in the US of reaching their development goals of respect and support of its citizens, responsiveness to the public, public safety, responsibility for the environment. The mayors understand how pouring the wealth of our great country into building war machines while allowing our cities to deteriorate does not make us more secure.

Our mission is to encourage people to reflect on how we are all invested in the war economy, take actions to divest from it,  and tell their cities to join with other cities and find that it is in the best interests of their City’s development goals and priorities to urge the United States Congress to move our tax dollars in exactly the opposite direction proposed by the President, from militarism to human and environmental needs. From a war economy to a peace economy creating conditions conducive to life. Join us!

Support our work for peace and justice.

WHEREAS, part of helping alleviate the refugee crisis should be ending, not escalating, wars that create refugees; and

WHEREAS, President Trump himself admits that the enormous military spending of the past 16 years has been disastrous and made us less safe, not safer; and

WHEREAS, fractions of the proposed military budget could provide free, top-quality education from pre-school through college, end hunger and starvation on earth, convert the U.S. to clean energy, provide clean drinking water everywhere it’s needed on the planet, build fast trains between all major U.S. cities, and double non-military U.S. foreign aid rather than cutting it; and

WHEREAS, as even 121 retired U.S. generals have written a letter opposing cutting foreign aid; and

WHEREAS, a December 2014 Gallup poll of 65 nations found that the United States was far and away the country considered the largest threat to peace in the world; and

WHEREAS, a United States responsible for providing clean drinking water, schools, medicine, and solar panels to others would be more secure and face far less hostility around the world; and

WHEREAS, our environmental and human needs are desperate and urgent; and

WHEREAS, the military is itself the greatest consumer of petroleum we have; and

WHEREAS, economists at the University of Massachusetts at Amherst have documented that military spending is an economic drain rather than a jobs program,

NOW, THEREFORE, BE IT RESOLVED, that The United States Conference of Mayors urges the United States Congress to move our tax dollars in exactly the opposite direction proposed by the President, from militarism to human and environmental needs.

Resolution 60: Resolution Calling for Hearings on Real City Budgets Needed and the Taxes our Cities Send to the Federal Military Budget

WHEREAS, The United States Conference of Mayors has for numerous years passed resolutions calling for cutting the military budget to spend the savings on human needs; andWHEREAS, the severity of the ongoing economic crisis has created budget shortfalls at all levels of government and requires us to re-examine our national spending priorities; and

WHEREAS, the military portion of our discretionary Federal budget has been for many years and continues to be greater than fifty percent; and

WHEREAS, reductions in spending on the military budget should be done in a measured way that does not destabilize our communities nor reduces in any way funds for Veterans; and

WHEREAS, funds should be allocated to create a just transition to a civilian economy; and

WHEREAS, city governments throughout the nation are hard pressed to maintain city services and meet their responsibilities to their constituents; and

WHEREAS, The US Conference of Mayors wishes to draw our residents into the conversation so that they too can express their wishes,

NOW,THEREFORE, BE IT RESOLVED, that The United States Conference of Mayors calls on the Mayors of each of our cities to promptly hold public hearings that examine what each of city’s Departments needs to carry out the goals of the Department and the work it is assigned and what they could accomplish if funds were available that now go to the military; and

BE IT FURTHER RESOLVED, that each city is urged to include in its public hearings a report on how much of its resident’s federal taxes go toward paying the military budget; and

BE IT FURTHER RESOLVED, that each city government is urged to pass a resolution calling on our federal legislators and the US government to move significant funds away from the military budget to human needs; and

BE IT FURTHER RESOLVED, that each city is urged to send a copy of the resolution passed to its federal legislators with a request that they respond with their plans to reduce the military budget in favor of the human needs budget.