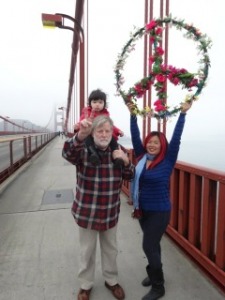 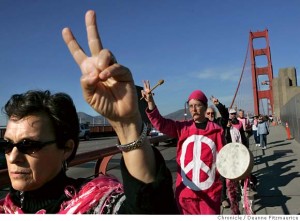 Had enough of War and more War?

Under President Obama, U.S. “military intervention”  has expanded into at least seven countries.  Most recently we are supplying Saudi Arabia with billions of dollars in military aid so that they can do our killing for us in Yemen. At least 74 children have died in just 2 weeks of Saudi bombing.  Then there are the millions who have been killed, tens of millions displaced, and tens of millions injured…in Iraq, Afghanistan, Syria, Libya, Yemen, Pakistan, Somalia and elsewhere.
And our dear soldiers suffer too, if not from death or injury, then from PTSD and death by suicide.
Clearly and tragically, WAR IS NOT WORKING, except for the war profiteers!
Will you join us?

Wear black to be part of the somber funeral procession, as we carry 7 coffins for the 7 countries who are victims of this continued bloodshed. White masks will be provided, or come with white face paint or your own mask.  Bring drums.  I’ll bring the giant PINK floral peace wreath too.

Or, just come as you are, and bring friends!

-WAR IS NOT WORKING

(Media will be invited also!)

Noon:   Gather at the SF or Marin side of the eastern walkway of the Golden Gate Bridge to process and converge in the middle!

Parking lots on all four corners.

1:00pm:   Closing circle, rally, singing, and treat sharing on SF side after the bridge walk.

BE GREEN AND CARPOOL