The University of California at Berkeley continues to harbor and employ a war criminal. Torture is a war crime under all U.S. and international law, and John Yoo was a principal legal architect of the Bush/Cheney torture machinery, before returning to Berkeley Law where he now teaches constitutional law and other core courses to the next generation of lawyers and judges.

John Yoo has been principally associated with his work from 2001 to 2003 in the Department of Justice’s Office of Legal Counsel (OLC) under Attorney General John Ashcroft during the George W. Bush Administration. Yoo’s expansive view of presidential power led to a close relationship with Vice President Dick Cheney’s office. He played an important role in developing a legal justification for the Bush administration’s policy in the war on terrorism, arguing that prisoner of war status under the Geneva Conventions does not apply to “enemy combatants” captured during the war in Afghanistan and held at the Guantánamo Bay detention camp.

In addition, in what was known as the Bybee memo, Yoo asserted that executive authority during wartime allows waterboarding and other “enhanced interrogation techniques,” usually regarded as torture by the subsequent administration, yet at the time, undefined in the realm of a “war” against terrorism. Yoo argued in his legal opinion that the president was not bound by the War Crimes Act. In addition, he provided a legal opinion backing the Bush Administration’s warrant less wiretapping program.

Yoo’s legal opinions were not shared by everyone within the Bush Administration. Secretary of State Colin Powell strongly opposed what he saw as an invalidation of the Geneva Conventions. while U.S. Navy general counsel Alberto Mora campaigned internally against what he saw as the “catastrophically poor legal reasoning” and dangerous extremism of Yoo’s opinions.

In 2009, the Spanish Judge Baltasar Garzon Real launched an investigation of Yoo and five others known as the Bush Six for war crimes.

After the December 2014 release of the executive summary of the Senate Intelligence Committee report on CIA torture,Senate Intelligence Committee report on CIA torture, Erwin Chemerinsky, dean of the University of California, Irvine School of Law called for the prosecution of Yoo for his role in authoring the Torture Memos “conspiracy to violate a federal statute”.

Despite a worldwide outcry, UC Berkeley has still not taken a single step to investigate John Yoo’s status on the faculty. A lawyer whose career hallmark is his stint in Bush’s Justice Department providing legal-sounding excuses so that torture could be used under color of presidential power, can not be a role model mentoring students. 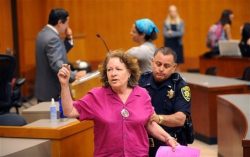 CODEPINK has been active calling for the arrest of John Yoo for war crimes from the very beginning of his returned to teaching in 2009.  In the above photo  a police officer leads CODEPINK member  Cynthia Papermaster from a University of California, Berkeley classroom while Professor John Yoo, left, prepares to teach on Monday, Aug. 17, 2009. CODEPINK and has continued year after year to call for John Yoo arrest. This year we invite you to please join us in calling for John Yoo arrest.

The acts of torture that John Yoo and other Bush administration officials so proudly defend are nothing less than war crimes. CODEPNK and co-sponsor SF World Can’t Wait mission, in concert with people of conscience across the country, is to prosecute officials responsible that allowed the United States to commit war crimes and crimes against humanity.
Contact World Can’t Wait to tell us how you want to help: sf@worldcantwait.net
More Information:
1 www.law.berkeley.edu/research/korea-law-center/mentoring-next-generation/2 www.pbs.org/newshour/bb/education-july-dec09-tenure_10-20/ 3 https://sites.google.com/site/abolishtorture/press-releases