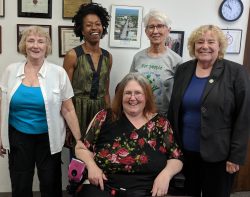 CODEPINK SF Bay Area invites everyone to join CODEPINK’s campaign to tell their elected representative to divest from a war economy and to invest in a peace economy. Above is a photo of our CodePink / SJPJC delegation that met with Zoe Lofgren on Monday 6/18.  We asked her to commit to NOT accepting donations from weapons companies and the NRA. We expressed the hope that she would support the moves to peace on the Korean peninsula and continue working to end U.S. support for the Saudi coalition that is bombing Yemen. Thanks to the work of our local CODEPINK communities we getting a growing number of elected officials to refuse contributions from the NRA and the top five weapons manufacturers: Lockheed Martin, Northrop Grumman, Raytheon, Boeing and General Dynamics. Since these officials are constantly voting on issues related to military spending, these decisions must not be tainted by the corrupting influence of weapons lobbyists. Who are spending millions of dollars on lobbying and campaign funding to ensure that members of Congress pay more attention to them than to the general public. With the upcoming midterm elections, we are seeing the full force of this tsunami of cash washing over our electoral system.

U.S. weapons companies have traditionally treated the Republican Party as their base in Congress, and they still contribute more to Republicans than Democrats. But as we can see hawkish Senate Democrats play a critical role as swing votes to keep the country at war and to ensure that the lion’s share of tax revenues keep flowing to the military-industrial complex. As they joined Republicans and voted to increase the FY2018 military budget to  $700 billion.

The current United States policy of tough militarism for the last three administrations has got the US directly involved in 7 countries  wars/civil wars, which has created nearly 800 military bases around the world, while spending of trillions of dollars is failing to make us safe or bring peace. The cost of war is preventing the US of reaching it’s development goals: health care, education, infrastructure, retirement, improved wages, recreation and responsibility for the environment. The  committed divest elected officials understand how pouring the wealth of our great country into building the war machine while allowing our country to deteriorate does not make us more secure.

How can we, the public, make our voices heard by a Congress corrupted by war profiteers, when the war industry can buy a bipartisan majority for war and militarism in the U.S. Senate with such a tiny fraction of its profits? By joining together with us and others around the country on our mission to encourage people to reflect on how we are all invested in the war economy, take actions to divest from it,  and tell our elected officials to join with other elected officials  at the local, state and national levels to find that it is in the best interests of our country development goals and priorities to urge the United States Congress to move our tax dollars in exactly the opposite direction proposed by the President, from militarism to human and environmental needs. From a war economy to a peace economy creating conditions conducive to life. Join us!