Jan 25 World Says No to War on Yemen

CodePink is joining other Anti-war, Yemeni and humanitarian organisations from across the world that are coming together to call an international day of action on January 25th 2021. Join us in DC, San Jose and other cities as we say No War on Yemen.

Since 2015, the Saudi-led bombing and blockade of Yemen have killed tens of thousands of people and devastated the country. The U.N. calls this the largest humanitarian crisis on Earth. Half the country’s people are on the brink of famine, the country has the world’s worst cholera outbreak in modern history, and now Yemen has one of the very worst COVID death rates in the world: It kills 1 in 4 people it infects. The pandemic, along with withdrawal of aid, is pushing more people into acute hunger. And yet Saudi Arabia is escalating its war and tightening its blockade.

The war is only possible because Western countries — and the United States and Britain in particular — continue to arm Saudi Arabia and provide military, political and logistical support for the war. The Western powers are active participants and have the power to stop the world’s most acute human crisis. The disaster in Yemen is man-made. It is caused by the war and blockade. It can be ended.

People and organizations from the U.S., Britain, Canada, France, Italy, and across the world, are coming together to call for an end to the war in Yemen and solidarity with the people of Yemen. We demand that right now our governments:

We call on people around the world to protest the war on January 25, 2021, just days after the U.S. presidential inauguration and the day before Saudi Arabia’s ‘Davos in the Desert’ Future Investment Initiative.

We ask individuals and organizations everywhere to call for protests — with masks and other safety precautions — in their towns and cities on that day and make clear that the WORLD SAYS NO TO WAR ON YEMEN.

We call on people around the world to protest the war on January 25, 2021, just days after Biden’s inauguration and the day before Saudi Arabia’s ‘Davos in the Desert’ Future Investment Initiative.

So far, over 100 organisations worldwide are committed to the actions. Join them now. 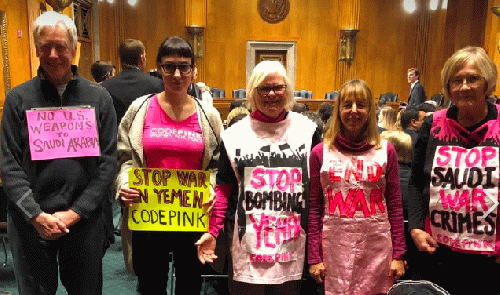