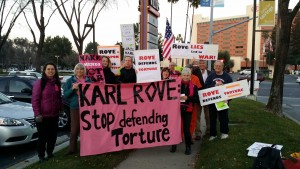 Codepinkers came from around the Bay:

Apologies if I’m forgetting anyone…

We held signs and banners, chanted & made our presence known at the Concord Hilton, and received lots of honks of support from passersby! Near the end of the action, Eleanor and Rick Sterling delivered our letter to the East Bay Leadership Council which all of us had signed. (See below for text.) It was received by the head of the EBLC, and his wife said that she agreed with us on Rove and that he should be asked “hard questions” at the speaking event.

KTVU sent a camerman and Susan Harman was interviewed on why Rove should be in jail for advocating torture (and other bad deeds), not honored and funded by the East Bay Leadership Council. Alas, the interview was not used but KTVU did show a clip of our action last night about 10:05. If you can find it online, please post to this list!

Great to be in action with folks from Mt Diablo Peace & Justice Center. Rick Sterling, board member, was my co-organizer, and Director Margli Auclair sent out the press release and helped make signs and flyers.

Down with torture, DOWN!

Rove’s not welcome in our town!

(& neither is Tauscher, for other reasons…)

Thanks again to all who made this happen. Every day is the right day to protest those who defend and advocate torture. There is NEVER a justification for it. 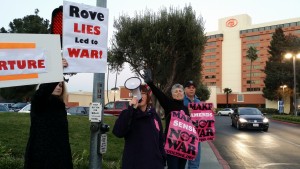 To the Board of the East Bay Leadership Council

Subject: Protest of your choice of Karl Rove and Ellen Tauscher as speakers at the “29th Annual East Bay USA Dinner”

We, the undersigned, object to your selection of Karl Rove, former strategist for the GW Bush administration, and Ellen Tauscher, former Under Secretary of State for Arms Control, as honored speakers at a public event in Contra Costa County.

Karl Rove, as a member of the White House Iraq Group (WHIG), wrote speeches and other documents containing lies about WMDs in Iraq that led the United States into a disastrous and very expensive war of occupation in that country. That war, costing over 4400 US lives, up to 1 million Iraqi lives and $3 trillion of our tax dollars (and counting), drained resources from much-needed civilian economic development, including green energy programs. Rove has also appeared recently on national TV programs attempting to defend the worst torture techniques used by the CIA, after the release of the “Torture Report” by the Senate Intelligence Committee. Karl Rove is not a leader whose thoughts we respect, or someone whose words we need to hear.

We also object to your choice of Ellen Tauscher as a speaker. As a former member of Congress and as a current board member of 2 nuclear weapons laboratories, she has been an advocate for “safe, reliable and effective” nuclear weapons (effective against whom? to what end?) and a booster of so-called “missile defense.”

The people of the East Bay are interested in the use of their hard-earned tax dollars for sustainable energy programs, civilian economic development, and foreign policy that does not kill and damage our young people in needless wars brought about by lies. We encourage you to seek speakers to can address these, the real needs of our community.

[SIGNED BY ACTION PARTICIPANTS – about 16 names] 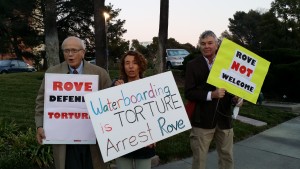 “We make history, or history makes us.” – Marge Piercy