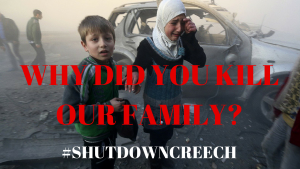 Everyone is invited to join CODEPINK at Fall Resistance Week of Non-violent Action to Stop Drones and Endless Wars. These endless wars began in 1991 with the Gulf War. Then the failure to arrest Saddam Hussein as war criminal lead to a no fly zone, sanctions and the death of 500,000 children. In 2001 the US invaded Afghanistan.  In 2003 the US invaded Iraq again causing millions of causalities, civil war and creating millions of refugees. These wars had a domino affect on five other countries spreading death and destruction on a continental scale.  Since 2009 dozens of protestors/activists have been arrested at  Creech Air Force Base, because it is the brain of a worldwide killer drone network, demanding that their government stop the indiscriminate killing, injury, and trauma to civilians in Pakistan,  Afghanistan, Somalia, Iraq, Yemen, Syria, and Libya caused by drones and endless wars.
CODEPINK disputes the government’s claim that the use of drones is a surgically precise and effective tool that makes the US safer by enabling “targeted killing” of terrorists, with minimal downsides or collateral damage. This argument is a cover up, a lie in the face of facts, there is huge collateral impact; thousands of non-combatants, even American citizens have been killed in covert drone missions plus the destruction of hospitals, schools, infrastructure, towns and cities. The threat of terrorist attacks are increasing as is the growing stream of refuges and human misery.  Drone attacks are causing widespread civilian trauma not only in the Middle East, but in the US and Europe as well, nobody is safer. Peace is nowhere in site.

Drones strikes are not making us safer is not just the conclusion of us protesters, but of leading Academic institutions. In a report issued in September 2012 by the International Human Rights and Conflict Resolution Clinic of Stanford Law School and the Global Justice Clinic at NYU Law  entitled Living Under Drones, the authors make the following observations and recommendations:

“Following nine months of intensive research—including two investigations in Pakistan, more than 130 interviews with victims, witnesses, and experts, and review of thousands of pages of documentation and media reporting—this report presents evidence of the damaging and counterproductive effects of current US drone strike policies. Based on extensive interviews with Pakistanis living in the regions directly affected, as well as humanitarian and medical workers, this report provides new and firsthand testimony about the negative impacts US policies are having on the civilians living under drones.

First, while civilian casualties are rarely acknowledged by the US government, there is significant evidence that US drone strikes have injured and killed civilians. In public statements, the US states that there have been “no” or “single digit” civilian casualties.”  The Bureau of  Investigative Journalism (TBIJ), an independent journalist organization,  reports that from June 2004 through mid-September 2012, available data indicate that drone strikes killed 2,562-3,325 people in Pakistan, of whom 474-881 were civilians, including 176 children. TBIJ reports that these strikes also injured an additional 1,228-1,362 individuals. Where media accounts do report civilian casualties, rarely is any information provided about the victims or the communities they leave behind.

Second, US drone strike policies cause considerable and under-accounted for harm to the daily lives of ordinary civilians, beyond death and physical injury. Drones hover twenty-four hours a day over communities in northwest Pakistan, striking homes, vehicles, and public spaces without warning. Their presence terrorizes men, women, and children, giving rise to anxiety and psychological trauma among civilian communities. In addition, families who lost loved ones or their homes in drone strikes now struggle to support themselves.

Third, publicly available evidence that the strikes have made the US safer overall is ambiguous at best. The strikes have certainly killed alleged combatants and disrupted armed actor networks. However, serious concerns about the efficacy and counter-productive nature of drone strikes have been raised. The number of “high-level” targets killed as a percentage of total casualties is extremely low—estimated at just 2%. Furthermore, evidence suggests that US strikes have facilitated recruitment to violent non-state armed groups, and motivated further violent attacks.  One major study shows that 74% of Pakistanis now consider the US an enemy.

Fourth, current US targeted killings and drone strike practices undermine respect for the rule of law and international legal protections and may set dangerous precedents. . The US government’s failure to ensure basic transparency and accountability in its targeted killing policies, to provide necessary details about its targeted killing program, or adequately to set out the legal factors involved in decisions to strike hinders necessary democratic debate about a key aspect of US foreign and national security policy. US practices may also facilitate recourse to lethal force around the globe by establishing dangerous precedents for other governments.

In light of these concerns, this report recommends that the US conduct a fundamental re-evaluation of current targeted killing practices, taking into account all available evidence, the concerns of various stakeholders, and the short and long-term costs and benefits. A significant rethinking of current US targeted killing and drone strike policies is long overdue. US policy-makers, and the American public, cannot continue to ignore evidence of the civilian harm and counterproductive impacts of US targeted killings and drone strikes in Pakistan.” 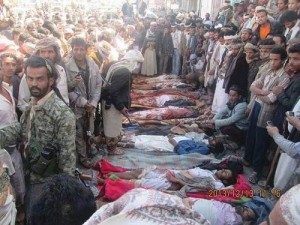 Many veterans and groups such as  Veterans for Peace, a co-sponsor of the Creech Resistance Week, are calling for a fundamental re-evaluation because they understand that the present strategy is losing the war and drone attacks cause suffering and that suffering is being turned into hatred against  America. In November 2015, four Air Force drone veterans who were based at Creech wrote to President Obama: “We came to the realization that the innocent civilians we were killing only fueled the feelings of hatred that ignited terrorism and groups like ISIS while also serving as a fundamental recruitment tool similar to Guantanamo Bay. This administration and its predecessors have built a drone program that is one of the most devastating driving forces for terrorism and destabilization around the world.”

Last year nearly 150 activists from 20 states, including over 50 veterans, joined CODEPINK for a week of resistance against drone killings at Creech Air Force Base. In a very successful civil disobedience action last year, we were able to interrupt “business as usual” for nearly an hour, with 34 activists ultimately arrested. This year we hope to double the number of people attending and asking their government to Stop Drones and Endless Wars.! CODEPINK demonstrates because we want our government to stop the killing and start the rebuilding of hospitals. schools, towns and people’s lives. We hope you can join us, and help spread the word that drones strikes brings endless war, it does not make us safer or will it bring peace!

Please join us to make Resistance Week 2016 an even more powerful stance against illegal drone killing and endless wars!
When: Nov 6 – 12, 2016
Where: Creech Air Force Base, Indian Springs, Nevada 89018

Deadline to register:  October 29, so that we can coordinate work groups for meal planning and prep, etc. Participants will each share in one day of meal preps.  Meals will be primarily vegan/vegetarian.  Please let us know asap if you plan to come, and if you have food allergies or other special needs.

BED RESERVATIONS:  Please contact Maggie,  maggiehuntington32@yahoo.com
We will share meals and chore responsibilities.  Women will be staying in the Goddess Temple guest house, men will be camping somewhere on the Goddess Temple grounds.  Outdoor shower available for men.
The guest house has very limited beds, so early registration is highly recommended to guarantee a bed for you.
TRANSPORTATION:  Please contact Eleanor,  dreleanorlevine@yahoo.com
for coordinating RIDE SHARING and Airport Pick-up and drop off from Las Vegas. Please let her know, asap if you can offer a ride, or need one….airport pick-up may require a 2-3 hour wait, depending).
BEST TIME FOR FLIGHTS:
Optimal Arrival Times:  9:00am – 7pm
Optimal Departure Times:  10:30- 7pm
BEST to schedule flights between vigil times, 9am to 2am, or travel on the weekend
Please avoid early am or late pm flights.  We also understand that there may be personal reasons these times can’t work, and we will do our best to accommodate you.
GREAT NEWS:  Our wonderful friend, filmmaker & documentarian, Nico Columbant, will be joining us again.
Please notify us if you have any great ideas for our upcoming NO DRONES WEEK & RETREAT at Creech!
SHUT DOWN CREECH NOW!
For more information visit our website and be sure to register using this form. Join our Facebook page for updates and more info! Housing, transportation and other details are being organized. Together we are PEACE!

Consider joining us at our monthly action at Beale AFB as often as you can, or at a drone base nearest you.
Consider joining us at Creech AFB this fall or spring, where U.S. Airmen are ordered to execute human beings from the desert of Nevada with armed Predator and Reaper drones:
Beale Monthly Action Nov.:
Fall Action at Creech: Resistance Week, Nov.  6 – 12, to STOP DRONES and ENDLESS WAR!
Spring Action at  Creech; 3rd Annual SHUT DOWN CREECH, National Mass Mobilization Against Drone Warfare:   April 23 – 29.