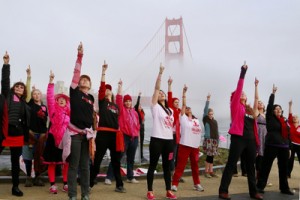 For the fifth year in a row, CODEPINK is organizing a Dance Across the Golden Gate Bridge in collaboration with One Billion Rising! THIS YEAR, 2017, WE ARE RISING IN SOLIDARITY AGAINST THE EXPLOITATION OF WOMEN! 1 in 3 women across the planet will be beaten or raped during her lifetime. That’s ONE BILLION WOMEN AND GIRLS. This year’s break the chain of violence dance across the Golden Gate Bridge will include a #Salsashutdown dance to draw attention to the exploitation of the millions of undocumented women immigrants living in the United States.

“This year, One Billion Rising Revolution is giving sharper focus and visibility to the exploitation of women. Exploitation is the action or fact of treating someone unfairly in order to benefit from their work and the action of making use of and benefiting from resources.  For women and girls, they are rendered more vulnerable to abuse of power in all areas – the home, in the workplace, and economically – when they have few or no options for survival.  The Rising continues as a demand to end ALL forms of exploitation of women and girls and to harnessing even stronger global solidarity to demand an end to violence in all forms.”

A study by the Southern Poverty Law Center found that unauthorized immigrant women do the jobs that put food on the plates of Americans, but face harassment and other challenges daily in the workplace. The report, titled “Injustice On Our Plates,” is based on interviews with 150 immigrant women from Mexico, Guatemala and other Latin American countries. The anecdotes collected by the organization provide a glimpse of the hardships faced by agricultural workers who are in the United States illegally.

According to the report, about six in 10 of America’s farmworkers are unauthorized immigrants. Of the total illegal immigrant population, women are estimated to make up 4 million. “Despite their contributions to our economy, these immigrants live at the margins of U.S. society — subsisting on poverty wages, enduring humiliation and exploitation in the workplace, and living in constant fear that their families will be shattered if they are detected.”

“Regardless of what sector of the food industry these women worked in, they all reported feeling like they were seen by their employers as disposable workers with no lasting value, to be squeezed of every last drop of sweat and labor before being cast aside.”

“The challenges include low pay — one woman reported that she earned $5.75 an hour, or sometimes 45 cents for each 32-pound bucket filled with tomatoes.”

Farmworkers are also exposed to harmful pesticides that can cause birth defects, the report stated.

A majority of the women interviewed by the center reported facing sexual harassment at work. “Sexual predators view farmworker women and other undocumented women as ‘perfect victims’ because they are isolated, thought to lack credibility, generally do not know their rights, and may be vulnerable because they lack legal status.”

The report’s recommendations included enacting comprehensive immigration reform that provide a path for legalization. Such efforts in Congress have been unsuccessful in the past. The center also recommends tightening labor laws for agricultural producers.

The farmworkes is only one industry were women migrants are being exploited by the American economy, being abused by males and living in fear that their dream of a better life in America will be shattered.

“One Billion Rising first began in 2013 with the fierce struggle against sexual and physical violence – taking on the advocacy against rape, battery, incest, female genital mutilation and sex trafficking that V-Day campaigns over 18 years have been at the forefront of. Over the last four years, as One Billion Rising has grown and the local campaigns deepened, it has also brought in economic violence and the violence of poverty, racial violence, gender violence, violence caused by corruption, occupation and aggression, violence caused by environmental disasters, climate change and environmental plunder, violence impacting women in the context of state sponsored wars, militarization, and the worsening internal and international displacement of millions of people, and violence created by capitalist greed, among so many others.”

“Throughout the first three years of One Billion Rising, activists have used “Break The Chain” – written and produced by Tena Clark with music by Tena Clark and Tim Heintz – as an integral and creative aspect of their Rising events.

This year, as the movement evolves into its fourth year, activists are invited to create and incorporate fresh new versions of “Break The Chain” into their rising events. Already communities around the world have adapted, localised and completely re-envisioned the choreography, in many places integrating the dance into their cultures so that it remains current and relevant. These incredible dances, as well as innovative versions and adaptations of the original choreography, have been shared throughout the campaign; they are unique and inspiring.”

“Every February, we rise – in hundreds of countries across the world – to show our local communities and the world what one billion looks like and shine a light on the rampant impunity and injustice that survivors most often face.  We rise through dance to express joy and community and and celebrate the fact that we have not been defeated by this violence. We rise to show we are determined to create a new kind of consciousness – one where violence will be resisted until it is unthinkable.”

Contact Information for the Dance across the Golden Gate Bridge February 12 12.00 PM