CODEPINK was delighted to participate in the September Swarm demonstrations outside BlackRock offices.

In Los Angeles, the CODEPINK team held a car caravan to the BlackRock office in Santa Monica. CODEPINKers brought the message of BlackRock: Stop Making a Killing on Killing!

In San Francisco, Bay Area CODEPINKers participated in an evening light brigade shining a light on the need to defund war. Later in the month, Cynthia Papermaster led a group of CODEPINK activists, Nancy Mancias, Jackie Barshak, Lotus Fong, Grace Severtson, Mishwa, and Luck-key, in a participatory procession to BlackRock’s Financial District office along with climate change activists affiliated with the Stop the Money Pipeline movement.

END_OF_DOCUMENT_TOKEN_TO_BE_REPLACED

Activists Rally on the International Day to Eliminate Nuclear Weapons

On Saturday, September 26 2020, activists joined the national movement to stand out for the elimination of nuclear weapons and to call on Congress to divest from war and invest in human needs.

From San Francisco, CA to Taos, New Mexico, to Chicago, IL activists demonstrated to draw attention to the billions of dollars we spend on nuclear weapons in our $740 billion Pentagon budget annually. Many protested outside of their Congressional representative’s office to hold them accountable for their vote on legislation to cut the Pentagon budget by 10%. Make sure you check here to see how they voted on historic legislation to cut the Pentagon budget by 10% and hold them accountable if they voted no!

Below are highlights from actions held across the country:

END_OF_DOCUMENT_TOKEN_TO_BE_REPLACED 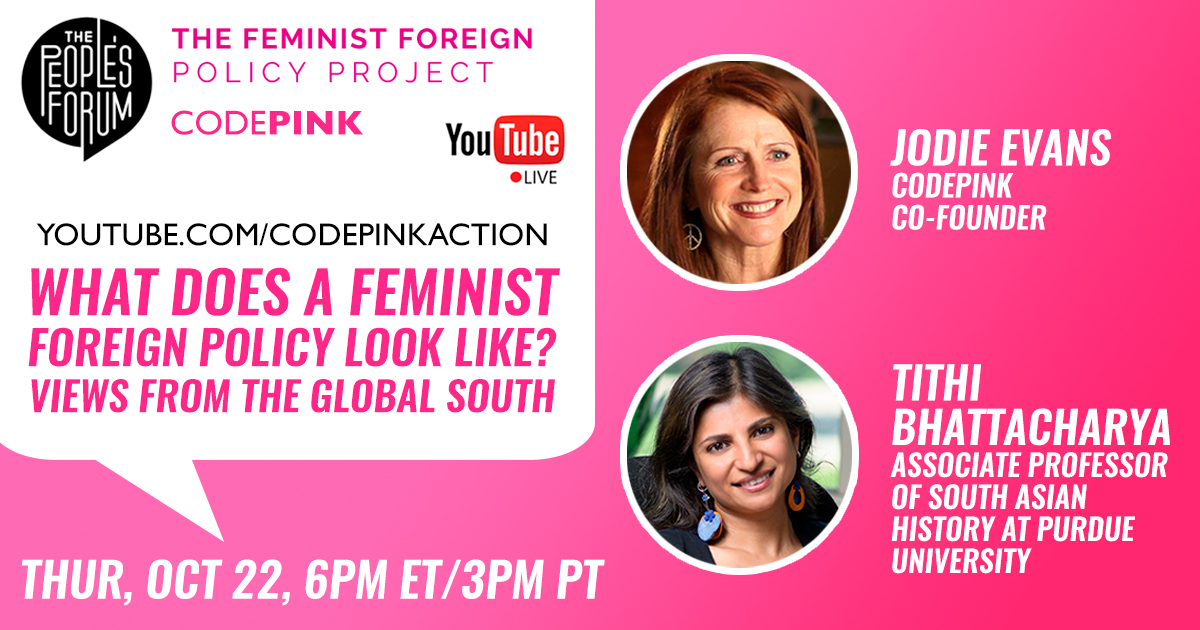 We are excited to bring you more conversations to dismantle the US led anti-China rhetoric. In this webinar CODEPINK’s co-founder Jodie Evans will be in discussion with Julie Tang, co-founder of Pivot to Peace and Michael Wong, an activist[...]
View Calendar
Add